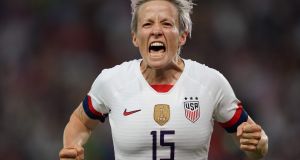 The success of this summer’s Women’s World Cup, which will crown its champion Sunday in the French city of Lyon, will be charted in many ways. Money, naturally. But also attendance. Sponsor interest. Water-cooler conversations.

Perhaps the biggest indicator, though, is a stunning growth in news media attention and corresponding growth in viewership for the matches.

Fifa issued about 1,300 credentials to print reporters and photographers for the tournament in France, double the number from Canada four years ago.

While journalists who regularly follow the game still face significant struggles to produce that coverage – some still cover their own expenses, and women often confront hurdles that are more universally familiar – many were surprised by the increase in n interest in their work this year.

“I’ve been receiving lots of messages, a lot more than I expected,” Carol Barcellos, a correspondent for Brazil’s biggest broadcaster, Globo, said before rushing out for another of the dozens of live broadcasts she produced before Brazil’s game with Australia in the group stage.

“People are happy to hear the incredible stories of what it took for these women to play football.”

Unprecedented viewership in Brazil has been matched elsewhere. French broadcaster TF1 set a viewership record for France’s victory over South Korea in the tournament’s opening match, and then broke it with each subsequent game. The BBC’s coverage has done the same in Britain, and from Italy to the Netherlands and as far away as Chile, broadcasters – and viewers – have turned up in record numbers to see their teams and the tournament.

Even in the United States, a market with a proven appetite for women’s soccer, the numbers are trending up. The Americans’ win over England in the semi-finals, watched on Tuesday by nearly 7.4 million people, was the highest-rated soccer broadcast in the US since the 2018 men’s World Cup final, breaking a record set last week during their game against France.

That figure raised hopes that the event’s holy grail – the audience of 23 million that watched the US beat Japan in the 2015 final, still the largest ever to watch a soccer match in America – might be within reach on Sunday.

But it is on the margins of women’s soccer, in new markets and in others where the game was long treated with indifference, and where coverage of the game still struggles to break through, where the gains have been the most impressive.

In soccer-mad Brazil, for example, where few things generate as much attention as the national team at a World Cup, the idea of a broadcaster like Barcellos sending regular dispatches from a soccer tournament in a faraway country was not out of the ordinary.

But Barcellos’ updates this summer were anything but normal. For decades in Brazil, the World Cup has largely meant only the men’s tournament, even though the country has had South America’s strongest women’s team for generations and its brightest star in the six-time world player of the year, Marta. Barcellos’ appearances from France were part of her network’s biggest push ever to showcase the Women’s World Cup in South America’s most-populous country.

The national team’s games, from an opening victory over Jamaica to its dramatic elimination by host France, were broadcast on the main channel for the first time and were called by Galvão Bueno, the voice of Brazil’s men’s team.

Some of the most intense new coverage of this World Cup, however, has been in Britain, where the BBC has used the event to anchor a campaign to showcase women’s sports across its platforms.

Changes have not eliminated many hardships that still exist for those who cover women’s soccer. Misogyny and bad pay have been indelible features for journalists trying to carve out a career covering the women’s game, and it remains to be seen whether “promotions” to jobs covering women’s soccer will typecast female reporters or damage their chances at higher-profile posts.

Some credentialed reporters are paying their own way in France. A few used vacation time to attend the World Cup. Others have had more personal struggles. Take Shireen Ahmed, a Canadian freelance journalist and contributor to “Burn It All Down,” a feminist sports podcast. Shortly before the tournament, Ahmed was targeted on social media after publicly criticising Copa 90, a global media company that provides soccer content to a core audience of millennial males.

When Ahmed suggested the company had erred in including a presenter with a history of sexist social media postings in its Women’s World Cup promotion video, Copa 90 released a statement distancing itself from the posts. But Ahmed faced an intense, and immediate, backlash all alone.

“It was really traumatising,” said Ahmed, a Muslim woman who wears a hijab and says she typically braces for abuse whenever she posts about sports.

“But I’d probably do all of it again.”

Internet trolling is not limited to Ahmad. (Germany’s team made an entire video mocking it before the tournament.) Alex Scott, a former England national team player and now a respected commentator in Britain, spoke up on the issue after receiving daily abuse throughout last season as she provided analysis on Premier League games.

“I shouldn’t have to go through that,” Scott said on a BBC clip that she has pinned to the top of her Twitter feed.

A pervading sense of a second-class status is not helped by the economic conditions faced by those who cover women’s soccer. The main women’s soccer writer for one of Britain’s leading outlets was told to pay her own expenses at the World Cup before a backlash from inside the company forced the newspaper to back down.

Others in France have not been so lucky.

Stephanie Meek and Rachel Bach, two 28-year-old Australian photographers, described themselves as “volunteers” at the tournament before agreeing that the description was perhaps not accurate enough.

She and Bach are providing photos from the World Cup for an Australian website free of charge, something they said they also do when they cover the women’s game at home. “We’re willing to do it because we’re passionate, and we believe it needs to be covered,” Meek said.

“We’ve always been told men’s sports have always been more valuable, and that model has not changed yet,” said Jane McManus, a former ESPN columnist who now works as the director of the Center for Sports Communication at Marist College in New York. “I would love to see that model change.”

As the sport grows in popularity, the question of who gets to cover it will, too. In England, some of the top names in soccer writing have started to follow the sport more closely, particularly since the appointment of Phil Neville as England’s coach. That has led to deeper coverage but also to resentment from those with years invested covering the women’s game who now see themselves being pushed to the margins. Sometimes literally.

Sophie Lawson, a freelance reporter, recalled some of the biggest names on Fleet Street, almost all of them men, descending on a media event last January to announce Neville’s hiring. The reporters were ushered to a circle of chairs around Neville for a group interview. But there was not enough room to accommodate all those present, so Lawson and several other female reporters were asked to sit behind Neville. She spent the interview staring at the back of his head.

1 Monica Seles: The warrior queen who could have been the best ever
2 Leicester seek to flatten their dismal curve and end season on a high
3 Andrew Porter: Introducing contactless contact sessions
4 Whole New Ball Game: Rugby players could test public support over pay cuts
5 Red Bull poised to protest over Mercedes’ new steering system
Real news has value SUBSCRIBE
Crossword Get access to over 6,000 interactive crosswords