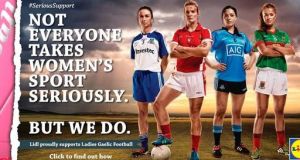 Lidl Ireland, a pioneer in the Irish women’s sport market, via its sponsorship of Ladies Gaelic Football Association (LGFA).

There’s a quick test to gauge how seriously a famous football club takes its women players. Look at the team shirt: is the sponsor’s logo for the women’s team the same as that worn by the men?

If the answer is yes, it means the commercial rights to the women’s team were probably sold within a deal for the men’s shirt sponsorship by the club.

The conversation would run along these lines: If you pay for the blokes’ team, we’ll throw in the women for nothing or give it to you heavily discounted, as a sweetener.

The bundling of rights happens at a federation level too with Fifa and Uefa both using this tactic when selling its sponsorships around World Cups and European Championships. The subtext is clear: the notoriously male dominated sports industry doesn’t value women’s football, otherwise they would sell it separately.

But there are signs that this attitude is changing, not because recognising and celebrating women’s athletic performance is the right thing to do, but because it looks like there might be money in it.

This summer’s World Cup in France is being watched by record TV audiences and the last few months have seen a flurry of new sponsorship announcements by big companies seeking to align their brands with women’s sport at a national and international level.

Izzy Wray, consultant in Deloitte’s Sports Business Group, said: “Historically, rights to a women’s football club or competition have been bundled as part of a broader package with the men’s equivalent. Commercial partners and broadcasters have tended to primarily focus on, and value, men’s clubs or competitions, with the women’s game not valued on its standalone merits. However, stakeholders are now seeing the many advantages of investing in a rapidly growing area of the world’s favourite sport.”

Put another way, there’s a market for the women’s game that stands on its own merits, regardless of the performance of the men. So, the next time the rights come to market, the women’s team will be sold separately, creating a new revenue stream for the clubs.

Deloitte’s research suggests that 60 per cent of top-flight women’s football clubs globally have front-of-shirt sponsors that are different to the men’s equivalent. The findings are based on information from the 2018/19 season and Deloitte expects that the proportion of teams with distinct main sponsors to rise to 100 per cent by the time of the 2023 Women’s World Cup.

The good news story is not limited to football says Sally Horrox of Y Sport, a specialist women’s sport consultancy, who cites netball, hockey, cricket, motorsport and rugby as examples where new events and a fresh generation of star players are attracting corporate money.

“Deals valued at hundreds of thousands of pounds – often with more value in kind than cash – are being replaced by multimillion pound investment by household name brands making a long-term commitment,” says Horrox. “We are starting to destroy old myths around women’s sport and it’s not just football.”

The same themes are at play in Ireland, says John Trainor, founder of the Onside Sponsorship consultancy which tracks and measures the commercial market for sport. Trainor’s research suggests a spike in the interest shown in women’s sport by Irish-based companies, with three in four saying they intend to invest in the sector over the coming year, a rise of 14 per cent from the previous year.

Trainor cites the work of Lidl, the German-owned discount retailer, as a brand which has gained credit among its customers from being a pioneer in the Irish women’s sport market, via its sponsorship of the Ladies Gaelic Football Association (LGFA).

Sian Gray, head of marketing for Lidl Ireland, said that the company was initially drawn to the LGFA because the organisation shared the status of “underdog” in the Irish market. Lidl she says, sits below the “big three” supermarket chains of Tesco, Supervalu and Dunnes Stores, a corporate self-image that meant the company had an affinity with the women’s game: “Women’s GAA has traditionally been unloved territory for sponsors and we wanted to show a big commitment,” says Gray, who oversaw the company spending €3.5 million over the course of three years. “30,000 people attended the LGF final at Croke Park in 2015 – in 2018 that number was 50,000. That’s more people sitting in Croke Park, more eyes on the game via TV and social media channels and more girls playing GAA. All of these things are signs of growth and momentum.”

Gray’s reference to the corporate culture of Lidl resonates with others in the sports sponsorship market, who see a shift away from rigid adherence to media analysis as the basis for sponsoring a sport team or event. The data, says Shaun Whatling should only ever be just a part of the decision making process: “Good sponsorship is always a blend of analysis and creativity. The challenge is to get the balance right. And one thing that never really gets talked about is the role of company culture when big firms make sponsor decisions.”

Whatling references Barclays Bank’s recent decision to pay £10 million for the title rights to the FA Women’s Super League (WSL), a deal that is seen by some as a watershed moment in the development of the game in the UK.

“Barclays’ underlying culture is confident, bullish, occasionally headstrong,” says Whatling. “As we’ve all seen, that culture can lead them into deep water but in this instance, their instinct feels absolutely right.”

Compared to many men’s sports, women’s sport offers several benefits to their corporate partners, most notably it’s cheaper, the stars are more approachable and because there are fewer sponsors, there is more chance that sports fans will notice the company’s logo.

Sponsor consultant Jackie Fast says age is another factor, because young people come to this debate unshackled by the prejudice of their parents. They are savvy when it comes to the role of brands in their lives and realise the value their attention brings to companies they see as making a tangible difference to the world.

“Most brands are beginning to realise that the return on investment from their sponsorship isn’t generated from logo placement but from standing for something, which can lead to greater engagement between the fans and the brands.”

This euphoria around women’s sport is encouraging, but there’s a way to go before we see anything approaching gender equality, particularly in elite football, where the gulf remains enormous, both in prize money, salaries and commercial revenues. But this is where the opportunity lies, according to Deloitte’s research, which tracks the money in football among Europe’s wealthiest clubs.

Out of the 20 highest revenue generating clubs in world football, 17 have a women’s team and of these, only nine (53 per cent) have a separate front-of-shirt women’s team sponsor.

During the 2017-18 season, the incomes of Real Madrid and Manchester United were €750.9 million and €666 million respectively. Yet, Real Madrid have only just announced the establishment of a women’s team and Manchester United were very late to the game and tellingly, the club’s women’s team does not have a separate front-of-shirt sponsor for their team.

By the time the next World Cup comes around, expect that to have changed.

1 Cam Newton broke the mould: Can his flame be rekindled at the Patriots?
2 Pete Sampras: The forgotten great with the best serve in the business
3 The unsolved mystery of Goran Ivanisevic’s stunning Wimbledon win
4 The Game Changers: Vincent O’Brien, a pioneer who took Irish racing to the world
5 Tipping Point: DeChambeau’s transformation raises questions, but who will ask them?
Real news has value SUBSCRIBE
Crossword Get access to over 6,000 interactive crosswords