In children's sport it's the parents who need controlling

Children do not need shouts about performance from parents on sidelines 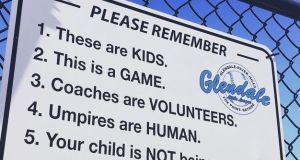 I’m sure no parent sets out to be that pushy parent that everyone hate, but the chances are your behaviour is ruining your child’s happiness

I have always been an outrageously competitive person. This is partially due to genetic make-up, but even more so for having been surrounded by absolute psychopaths who would do anything to win, no matter the cost.

Jenga in our house always ends in tears because someone is accused of using two hands or not using the compulsory thumb and adjacent finger.

Scrabble ends in more tears as intellectual capabilities are mocked, and people who use “stupid words” like “do” and “is” are immediately criminalised.

So when my nine-year-old niece decided she was coming out of retirement to join up with our local GAA team again, my sister was delighted. But then my niece drew up some rules for her mam.

Pushy parents are everywhere. From pushy parents at schools, Scór, the sidelines to a theatre – anyone who has brought their kid to a competition will always find a lunatic somewhere.

Someone hovering on the sideline with their head three inches from the ear of the coach and demanding that their kid be the star of the show.

Others will stand and berate everyone and anyone that is within a 100m radius, and is slowly driving children, coaches, referees and many more out of sport.

I’m sure no parent sets out to be that pushy parent that everyone hates. Some of them may think their kid needs some gentle encouragement to be the big star. Others believe it’s everyone else’s fault that their kids aren’t good enough.

You’re probably wondering why the niece “retired” in the first place. It all started on a lovely sunny school sports day, kind of where everyone’s sporting career dies or soars.

My niece is a hyperactive child, has so much energy to burn, and so we all thought she would be a clear winner over the no-hopes who ran only for fun. My niece was there, ready and prepared having put in training in our local park to be the best.

The race started, and my niece ran...but it was’nt long until she realised she had picked up a sidekick during the 60m. It was my sister, running next to her and giving her instructions on what to do.

My niece did a Mayo on it. She psyched herself out, and came a measly fourth. My sister wasn’t too bad about it, but the embarrassment was well and truly evident. A huge fight ensued, and my niece called it quits, no more running, no more camogie, she just wanted to be a kid again. It was probably best for both of them and their relationship.

I have attended various club events around Ireland, and there are so many common themes throughout, especially when it comes to girls in sports. They are all there to have fun, meet their friends, play with their friends and just have a positive experience.

Sure, some may not continue on after U-12s and, sure, a lot may not make it on to a county panel. But if they had a bad start in the first place they are definitely not going to continue.

Many efforts have been made to promote a healthy and positive experience for kids in every sport. The GAA has now insisted on silent sidelines where parents can’t mouth off at every single thing. The FAI encourages coaches to have either face-to-face meetings or send out letters to parents to maintain a good relationship. It even went as far as little league coaches in America saying they would rather coach orphans.

Like my sister I’m sure the intention was not there to be a sociopathic pushy parent who adamantly believes their child deserves some gentle encouragement. I’m sure that there is pressure on every parent, be it financial or otherwise, when a child decides to participate in sport.

But it still does not make it okay to berate and yell at kids, volunteers, coaches and referees.

Sport is an intense part of our society, and as more images and videos appear on social media of parents body-slamming referees or punching coaches, the bigger the spotlight gets on the number one influence on children.

Kids need parents’ acceptance, love and guidance. They do not need shouting about their performance and the embarrassment of over-eager parents. That needs to be stomped out sooner rather than later.