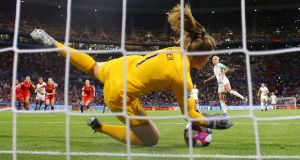 The USA’s Alyssa Naeher saves Steph Houghton’s penalty as her side knocked out England in the semi-finals. Photograph: Richard Heathcote/Getty

The Lionesses bow out after Houghton’s missed penalty

When the Lionesses captain, Steph Houghton, stepped up to the penalty spot the weight of England’s hopes and dreams were on her shoulders. England had gone toe to toe with the world champions, the USA, for more than 80 minutes of frenetic semi-final action, and emerged largely unscathed. If Houghton had beaten Alyssa Naeher, the prospect of extra time and a possible shootout loomed. But the defender failed to connect properly and Naeher saved to send her team to their third consecutive World Cup final.

It all could have gone so differently for the Netherlands. Rewind to their opener against minnows New Zealand and a chance to lift the World Cup seemed very distant. They looked toothless against the Football Ferns in Le Havre, struggling to penetrate an organised defensive unit.

When the clock ticked past the 90th minute, it appeared the pre-tournament hype around the Netherlands was misconceived. Suddenly, with 120 seconds of stoppage time remaining, the substitute Jill Roord headed home from close range. Her winner broke New Zealand hearts and set the Dutch on a path that would lead them to the World Cup final.

A fine line between VAR and farce

VAR has been a consistent source of controversy in France. But the technology’s use seemed particularly farcical (varcical?) when Nigeria’s goalkeeper Chiamaka Nnadozie was adjudged to have narrowly come off her line when Wendie Renard’s late penalty struck the post.

After consulting VAR, the referee Melissa Borjas booked Nnadozie and awarded France a retake, which Renard scored. At the time, the retake looked to have sent Nigeria crashing out, though they ultimately qualified for the next round as one of the best four third-placed teams. Fifa subsequently applied to the International Football Association Board for a temporary rule change, so that goalkeepers would not be cautioned if they cause a retake (but only in a shootout).

VAR missing when the hosts need it most

VAR’s unwanted use was a source of annoyance for many fans, but the technology went missing in action in the latter stages of the hosts’ blockbuster quarter-final against the USA. With France trailing by a goal in the 85th minute, the USA defender Kelley O’Hara appeared to block a cross with a hand in the penalty area.

In the pre-VAR era the referee’s decision to wave play on may have been understandable - the handball was marginal. But after the Netherlands had been awarded a winning penalty against Japan days earlier in similar circumstances, the lack of VAR intervention in Paris was bewildering - and cost France a chance to send the quarter-final into extra time.

Marta’s call to arms as she departs the biggest stage

After the tournament’s all-time leading scorer, the Brazil striker Marta, was eliminated in the last 16 by France, she gave an inspiring interview that quickly went viral. With the pain of defeat at what is likely the 33-year-old’s last World Cup etched on her face, Marta spoke directly to the young footballers of Brazil.

Matilda’s waltz home after Kerr errs from the spot

Australia exited the tournament in the last 16 but the presence of the green and gold shirt in stadiums across France in the subsequent weeks suggests Matildas fans had been optimistic about their team’s likely progress. Sam Kerr’s penalty miss against Norway in Nice will haunt them for some time. After an exhausting 120 minutes the Matildas’ marquee player stepped up to take Australia’s first penalty.

As millions of bleary-eyed Australians watched back home Kerr spectacularly hit it high and wide. There would be no recovery for the Matildas. When the Australia fans who remained in France file into the Stade de Lyon on Sunday, they will wonder what might have been had Kerr converted.