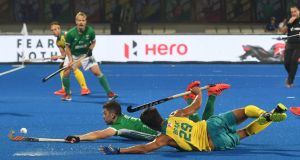 Ireland’s Matthew Bell in action against Tim Brand of Australia in their World Cup opener at Kalinga Stadium, in Bhubaneswar, India. Photograph: Inpho

It was a final act of defiance by Ireland when goalkeeper David Harte was taken off for the final few minutes of their opening match in the men’s hockey World Cup in India.

Coach Alexander Cox had set up Ireland to frustrate Australia with a defensive performance that will give them confidence against China on Tuesday and England in the final pool game.

The impulse from the Irish coach, only in place five months, was for Ireland to try to steal a late draw against the world number one side as the seconds ticked away.

It at least showed ambition as Ireland fell 2-1 against the defending world champions, while other pool members England and China finished with a 2-2 draw. A win and a draw from the next two games is probably what Ireland are now looking at to get a cross over match.

Against Australia Ireland played a game that they could have lost by more goals and could also have drawn from the limited number of chances they created.

Depending on what stats you read Australia ended the final quarter with 16 shots on target from 28 circle penetrations. Either way it was very high.

From that the correct conclusion to make was that Irish captain Harte had an inspired game in goal and was at the cutting edge of the Irish defence along with his twin brother Conor, Lee Cole, Paul Gleghorne, Matthew Nelson, and Jonny Bell, who took a ripper of a Jeremy Hayward drag flick off the line on 36 minutes.

But it was largely nervy stuff with Ireland forced into making strings of defensive tackles in their danger zone, many times plucking balls inches from goalkeeper Harte.

It was what Cox probably expected and from the tip-off Ireland set up half court and settled into a disciplined strategy of playing the match mostly in their own half, relying on breaks to temper the Australian edge.

It took just 11 minutes for Blake Govers to bring his scoring tally to 52 goals in 72 appearances, when his drag flick at a retaken penalty corner whizzed by Harte’s left ear. On another day the Irish goalkeeper may have gotten a pad to it. But the Aussie’s power took the ball high into the net for an early lead.

But within two minutes Ireland were level. In the next Irish attack Sean Murray slipped a forward ball into Shane O’Donoghue, running a cross field line into the circle.

The Dubliner flipped the ball up chest height and batted it in the air past the advancing Australian goalkeeper Andrew Charter for 1-1. How was that for 3D skills. It was O’Donoghue’s 93rd Irish goal equalling John Jermyn’s Irish record.

No doubt Australia were misfiring and scuffed some chances, badly injected a few corners. Between that, Ireland’s effective scrambling defence and like the women’s team did in London last summer, players running a body line on the Australia shots, the commitment was working.

Ireland’s weakness was when they attacked and the structure in defence was stretched. The Australian winner finally came from an Irish attack that broke down on the Aussie backline.

Some close interplay to move the ball out and then a quick transfer to Corey Weyer running down a left channel triggered the winning goal. Weyer hit the sweetest of reverse passes diagonally to an unmarked Tim Brand on the right.

The man of the match who celebrated his 20th birthday the day before, was initially saved by Harte but quickest to the rebound ball Brand dinked it high into an empty goal on the reverse side for 2-1.

Australia continued to press and Ireland never stopped biting with O’Donoghue’s ball through to Alan Sothern in the second half was probably the best Irish chance.

But he just couldn’t pick it up and it was left to Harte and the blanket defence to tough it out until the hooter.

“Our players put their bodies on the line for the result today,” said Cox after the match. “We always knew this was going to be a physical game against the world number one team.

“It wasn’t the result we wanted but I’m very proud of the whole team. We gave it our all and were in the game until the final whistle.”

That and more against a lively Chinese side on Tuesday.

1 Monica Seles: The warrior queen who could have been the best ever
2 Ferrari’s Charles Leclerc ‘will not take the knee’ before Austria GP
3 Michael Walker: Ian Baraclough staying on trend, from Sligo to Windsor Park
4 Serpentine stays on from the front to steal Epsom Derby for Aidan O’Brien
5 Matt Williams: Six Nations must recognise the desire for revolution outside Europe
Real news has value SUBSCRIBE