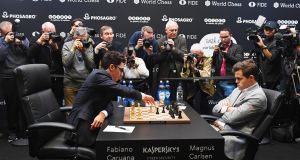 The world championship tilt between Magnus Carlsen and Fabiano Caruana will be decided in a quickfire tie-breaker after Monday’s Game 12 ended in a 31-move draw. The result shocked onlookers in light of the champion’s advantages in position and time, and left the best-of-12-games match in a historic 6-6 deadlock.

The latest bloodless result, the 12th draw between the world’s top two players in as many contests, ensured the €1m showdown in London will go down as the first title match in which no decisive results were managed in the official 132-year history of world championship play.

“I wasn’t necessarily going for the maximum,” said Carlsen, who essentially admitted he was content to settle it in the tie-breaker after move 20. “I just wanted a position that was completely safe, [BUT]where I could put some pressure. If a draw hadn’t been a satisfactory result, obviously I would have approached it differently.”

The 27-year-old champion from Norway will play as white in Wednesday’s first tie-break stage after a drawing of lots following Monday’s game: a best-of-four rapid match with 25 minutes for each player with an increment of 10 seconds after each move. If that’s not enough to break the deadlock, they will play up to five mini-matches of two blitz games (five minutes for each player with a three-second increment). If all five mini-matches are drawn, it will come down to one sudden-death ‘Armegeddon’ match where white receives five minutes and black receives four minutes and both will receive a three-second increment after the 60th move. If that game is drawn, black will be declared the winner.

Carlsen, who in addition to his number one ranking is the world’s top rated rapid player and top rated blitz player (compared to Caruana’s respective ratings of No 8 and No 16), is widely regarded as a warm favorite in the format, not least due to a 13-year unbeaten record in tie-breakers. But no less than Garry Kasparov said Monday that Carlsen’s hasty draw offer betrayed a lapse of nerve in the 27-year-old reigning champion.

“In light of this shocking draw offer from Magnus in a superior position with more time, I reconsider my evaluation of him being the favorite in rapids,” the longtime world number one wrote on Twitter. “Tiebreaks require tremendous nerves and he seems to be losing his.”

Caruana, as white, played into the Sveshnikov variation in Monday’s classical finale, as he did in the eighth and 10th games. Carlsen was first to deviate from those lines with 8. ... Ne7 and Caruana quickly fell behind on time after the champion played a novelty with 12. ... h5.

After Carlsen castled following a 12-minute think (20. ... O-O), Caruana delivered a surprise move (21. Rh2!?) that cost him in the opinion of the evaluation engines, but earned praise from the Russian grandmaster Alexander Grischuk from the commentary booth: “The deepest move in the match so far,” he said.

Which made Carlsen’s decision to offer a draw after 31. Rd1 Ra8 nothing short of mystifying. A relieved Caruana gladly accepted after a game that had lasted two hours and 57 minutes, sending the match to Wednesday’s tie-breaker.

“I was a bit surprised by the draw offer,” Caruana said. “I can never be better [THEN MOVE 31]. And I don’t really have any active ideas. If anything, black is better. At least I thought I was over the worst of it. I thought it was much more dangerous a few moves ago.”

He added: “I’m mainly relieved because I thought it was quite close today. I was very worried during the game. When you feel like you’re sort of on the brink of defeat, or at least you have a very dangerous position, then of course it’s quite good.”

Andrew Conway and Billy Holland sign contract extensions 10:54
Solskjaer complains about Molten balls after Brugge draw 08:12
Celtic’s Fraser Forster explains fourth penalty save of the season 08:03
United and Celtic grind out away draws; McIlroy leads the way in Mexico 07:30
Cian Healy’s hunger for battle undiminished by the years 06:00
Here is your handy guide to sport on television this week