Thomas Barr named Track and Field Athlete of the Year 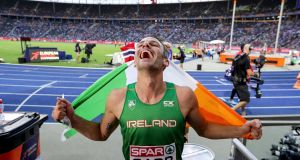 Nothing counts for more when it comes to sporting success, and the bronze medal won by Thomas Barr over the 400m hurdles at the European Championships in Berlin last August was always going to be the standout performance of the year.

It’s now earned Barr two bonus prizes – the outright winner of the Athlete of the Year at the 2018 Irish Life/Athletics Ireland awards, and also the Track and Field Athlete of the Year award, presented in Dublin this afternoon alongside an array of other worthy recipients.

Barr was also Athlete of the Year in 2016, on the back of his fourth place finish at the Rio Olympics, only stepping onto the medal podium in Berlin topped that, the 26 year-old also running the second fastest time of his life, 48.31 seconds, and providing one of the headlines of the year – Wunderbarr!

“You can hold it, show it,” said Barr, looking back on his bronze medal run. “You can’t with fourth place.”

He’s already looking to 2019 to raise the bar again, the World Championships in Doha much later in the season, October, presenting a different sort of hurdle, before the focus shifts again to the 2020 Tokyo Olympics. But he’s already on track, the 26 year-old Waterford athlete sticking by the coaching set-up and routine that has brought his so far: “If it ain’t broke, I’m not going to fix it”.

Indeed Mageean, European bronze medal winner over 1,500m in 2016, came close to adding another medal in Berlin, finishing fourth over 1,500m in Berlin, and Phil Healy was also nominated for Track and Field Athlete of the Year having set Irish records over both the 100m (11.28) and 200m (22.99) – the latter making her the first Irish woman to dip under 23 seconds.

There was a sort of consolation prize for the Cork athlete however as Healy was awarded with the Inspirational Performance of the Year award.

The summer of 2018 will also be remembered for the medal winning exploits of the emerging Irish women athletes at both the World Under-20 Championships in Tampere, Finland, and the European Under-18 championships in Gyor, Hungry, where Sarah Healy won a brilliant 800m/1,500m double, Rhasidat Adeleke won gold in the 200m, and Sophie O’Sullivan won silver in the 800m.

However these Under-18 achievements will be acknowledged separately at the National Juvenile Athletics Awards, presented next month, although Healy was named Schoolgirl Athlete of the Year for her success on the track and cross country with Holy Child Killiney/Blackrock, the Schoolboy award going to Aaron Sexton from Bangor Grammar/North Down, who won a sprint double, and is now playing rugby with Ulster.

The Under-20 medal successes in Finland were acknowledged on both counts: Sommer Lecky from Donegal was named Junior Athlete of the Year, having soared to a brilliant silver medal in the high Jump with a national under-20 record of 1.90m, and the 4x100m relay squad of Molly Scott Gina Akpe-Moses, Ciara Neville and Patience Jumbo-Gula and Rhasidat Adeleke were named Team of the Year, also winning a silver medal.

Not just a celebration of the many successes on the championship stage, the awards also acknowledge the association’s exceptional volunteer base, other award recipients including Paddy Marley (Lifetime Achievement Award) and Sean Callan (Outstanding Official of the Year), both stalwarts of Clonliffe Harriers.

Frank Greally, editor of the Irish Runner magazine for over 30 years, was also given a standing ovation when receiving the Special Recognition Award, duly deserving given his lifetime of commitment and service to the sport, his Irish junior 10,000m record of 30:17.0, set at Santry Stadium in 1970, still standing intact 48 years later.

U-20 Athlete of the Year: Sommer Lecky (Finn Valley)

U-23 Athlete of the Year: Matthew Behan (Crusaders)

Official of the Year: Sean Callan