World Chess Championships on the brink of Armageddon 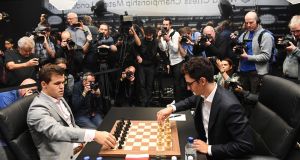 Twelve games. Forty-eight hours. More than 630 moves. An apparent intelligence leak. A definite black eye. There’s been nothing to separate Norway’s Magnus Carlsen and Fabiano Caruana of the United States in their world championship staredown over the last three weeks in London. Every one of their 12 classical games ended in a draw, making it the first title match in which no decisive results were managed in the competition’s official 132-year history.

But the historic deadlock will be resolved on Wednesday in a sound-proof studio at the College in London when the world’s top two players compete in a series of quickfire tie-breakers to determine an outright winner in the €1m (£880,000) match.

If Carlsen wins, the 27-year-old will seal his third defence of the title that he captured from Viswanathan Anand in 2013. If Caruana prevails, the 26-year-old challenger will become only the second American-born player to capture the world championship after Bobby Fischer in 1972.

For many, the protracted impasse has proven a deeply unsatisfying spectacle, prompting broad discussions over whether the match format needs an overhaul. Public dismay reached a climax after Monday’s Game 12 when Carlsen, whose reputation was built on the ruthless punishment of opponents in marathon endgames, appeared content to settle for yet another peaceful result after 31 moves despite clear advantages in time and position.

But Carlsen v Caruana – the first title showdown between the world’s No 1 and No 2 players since 1990, when Garry Kasparov and Anatoly Karpov faced off for a fifth and final time – was always pitched as an evenly matched bout between two elite operators brought up in the age of computer chess and by that metric it has surely delivered. The razor-thin margin between the contestants on the scoreboard is an accurate reflection of the three points that separate them in Fide’s Elo ratings.

Carlsen will play as white in Wednesday’s first tiebreak stage after the drawing of lots following Monday’s game: a best-of-four rapid match with 25 minutes for each player with an increment of 10 seconds after each move. (This is where the Norwegian was able to close the show after he was pushed to tie-breakers against Russia’s Sergey Karjakin two years ago in New York.)

If that is not enough to settle matters, they will play up to five mini-matches of two blitz games (five minutes for each player with a three-second increment). If all five mini-matches are drawn, it will come down to one sudden-death Armageddon match in which white receives five minutes, black receives four minutes and both will receive a three-second increment after the 60th move. If that game is drawn, black will be declared the winner.

Carlsen, who in addition to his No 1 ranking is the world’s top-rated rapid player and top-rated blitz player (compared to Caruana’s respective ratings of No 8 and No 16), has a far better record under tighter time controls and is widely regarded as favourite. He’s a perfect nine for nine in tie-breakers going back more than a decade with the added advantage of experience on the sport’s biggest stage.

Yet there have been indications Carlsen, having teetered so perilously against Karjakin in 2016, is an even further diminished player in London. His glib response to a reporter who asked if he had a favourite player from history – “Probably myself like three or four years ago,” he quipped – prompted laughter from the press gallery but was thick with confessional subtext and pathos. And no less than Garry Kasparov himself said on Monday that Carlsen’s hasty draw offer in Game 12 betrayed a lapse of spirit.

“In light of this shocking draw offer from Magnus in a superior position with more time, I reconsider my evaluation of him being the favourite in rapids,” the longtime world No 1 wrote on Twitter. “Tiebreaks require tremendous nerves and he seems to be losing his.”

Whoever prevails in Wednesday’s tiebreakers, it is clear the dialogue over a potential format change for the next world title match in 2020 will not be quietened anytime soon. Yet that’s a conversation for another day. When asked whether their unprecedented parade of draws, even in the package of a fiercely contested match, was bad for the sport, both Carlsen and Caruana bristled at the notion.

“We work with the match that we have,” Caruana said. “If the powers that be want to change it, then we’ll work with something else.” – Guardian service

1 Monica Seles: The warrior queen who could have been the best ever
2 Valtteri Bottas takes Austrian Grand Prix as Lewis Hamilton is demoted to fourth
3 Donnacha O’Brien takes first Classic as Fancy Blue wins French Oaks
4 Enable can’t reel in impressive Ghaiyyath at Sandown
5 Ferrari’s Charles Leclerc ‘will not take the knee’ before Austria GP
Real news has value SUBSCRIBE