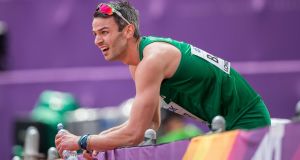 Two cases of norovirus have been identified after an outbreak of illness at one of the official London 2017 World Championships hotels.

One of those was Irish medal hope Thomas Barr, he was forced to withdraw from his 400m semi-final on Monday night due to the vomiting bug.

And Public Health England on Tuesday said around 30 people had been affected, with laboratory testing revealing norovirus.

A spokesperson for the Tower Hotel insisted it was “not the source of the illness”.

“We have so far been made aware of approximately 30 people reporting illness and two of these cases have been confirmed as norovirus by laboratory testing.

“PHE has been working closely with the London 2017 organisers and the hotel to provide infection control advice to limit the spread of illness.”

Norovirus, an unpleasant but rarely serious illness, is often caught through close contact or by touching contaminated surfaces or objects.

Norovirus can result in vomiting and diarrhoea, and those affected are encouraged to drink fluids to avoid dehydration.

Most people make a full recovery within one or two days, but those affected athletes scheduled to compete at the London Stadium may find the illness debilitating.

The Tower Hotel on Tuesday morning insisted it was working with the relevant authorities, including the IAAF, world athletics’ governing body, over the outbreak.

A spokesperson from the Tower Hotel said in a statement: “We can confirm that regretfully a small number of our guests have been suffering from an illness.

“We have worked collaboratively with the EHO (Environmental Health Officer) and IAAF to investigate the origins of the illness and can confirm that the hotel was not the source of the illness.

“We have followed strict hygiene protocol, ensuring that those affected are not in contact with other guests and all public areas have been thoroughly sanitised.

“We continue to liaise with the medical authorities and the IAAF to ensure the comfort of those guests affected and the health and well-being of all our guests remains a priority.”

Botswana’s Isaac Makwala, a 400 metres medal prospect, was given medical dispensation to withdraw from the 200m heats on Monday night after reportedly suffering food poisoning. Without a valid reason for pulling out, he could have been disqualified from the 400m final which takes place later on Tuesday.

The organisers of the global showpiece announced late on Monday that a number of athletes staying at the same official hotel have suffered from gastroenteritis.

Two-time world javelin silver medallist Steve Backley spoke on Tuesday morning of the precautions athletes needed to take as a matter of course.

He told BBC Radio 5 Live: “You always drink bottled water, you take the ice out of your water — you always do that when you travel overseas. You tend to eat foods that are low risk. Until they get to the bottom of where this bacteria has come from, this sounds like it’s a little bit more serious. But it’s the timing of it.

“If the timing’s bad and there’s something wrong systemically your body shuts down.

“The margins between gold, silver, not making finals, whatever level you are, are tiny at these championships — as they are at every major championships. You’ve got to get everything right.

“But if something is introduced out of your control, that’s bad timing. You feel desperately sorry for the people it does affect.”