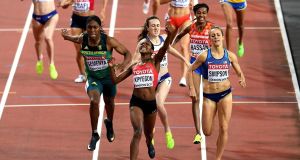 Wow. That was, as we say in this business, absolutely stacked, and depending on what you think of Caster Semenya the race which may help dismiss the suggestion she is running with an unfair advantage over other women.

Because these were unquestionably the best 1,500m women in the world, and even though an 800m specialist, Semenya was no match for them all, finishing third behind Faith Kipyegon from Kenya, the reigning Olympic champion who now has the World title to go with it.

Semenya was finishing faster than anyone, the South African woman running a 57.8-second last lap and several metres down coming into the homestretch, only the finish line came too soon – Kipyegon winning in 4:02.59, the American Jenny Simpson also closing fast to win silver in 4:02.76, to Semenya’s 4:02.90.

Missing out then on the medals in fourth was Britain’s Laura Muir, the 24 year-old student of veterinary medicine from Inverness, who had been in a medal winning position practically the entire race, except for when it came to the finish line.

Muir had helped make a true run race, knowing they needed to take some of the sting out of Semenya’s kick, only perhaps just not fast enough: after leading through 400m in 65 seconds, it slowed to 2:17 at 800m, and that’s possibly where Muir lost her medal.

Defeniding champion and world record holder Genzebe Dibaba from Ethiopia ended up last, with Sifan Hassan from the Netherlands also run out of the medals after making a brave push for gold from 600m out.

Semenya, the reigning two-time Olympic champion over 800m, had come to London with a now unbeaten 23-month run in the 800m, including 26 consecutive wins, and hasn’t lost a race in that event since the IAAF was forced to suspend its ruling on intersex athletes and hyperandrogenism, in 2015. [CROSSHEAD]Hyperandrogenism[/CROSSHEAD] This race also comes just as the Court of Arbitration for Sport (CAS) in Lausanne is re-evaluating their decision to suspend the IAAF rule on intersex athletes and hyperandrogenism, first introduced following Semenya’s breakthrough runs in 2009, when as an 18 year-old she won the World Championship 800m in Berlin in 1:55.45.

Two years ago, at the 2015 World Championships in Beijing and competing with that rule in place, Semenya finished in last place in her 800m semi-final, running 2:03.18. Perhaps CAS were even watching this too, because there is also the suggestion the IAAF won’t have enough evidence to overturn the ruling, Semenya’s defeat here possibly playing some role in that.

Semenya likely has three more races to run; the 800m heats on Thursday, semi-finals the next day, and the final on Sunday. Muir, too, is back later in the week to run the 5,000m.

Earlier, Jamaica ended their wait for a first gold medal in London when Omar McLeod won the 110m hurdles to go with his Olympic title, running 13.04 seconds and holding off defending champion Sergey Shubenkov, the Russian athlete representing the Neutral State, having proven he’d played no part in their doping scandals of late.

Seb Coe yesterday also shed some further thoughts on other controversy in London this week, surrounding Justin Gatlin’s shock 100m win over Usain Bolt: “We’re not the thought police and we can’t tell people what to think or feel,” the IAAF president wrote in his column with the London Standard. “People are welcome to boo. I don’t want people not to care and, in a funny way, I perhaps would have been slightly concerned if it had been a case of business as usual with all this.”

Despite the controversies, more than 11 million people tuned into BBC to watch the opening two nights, their coverage the most-watched programme in the UK on Friday and Saturday. A total of 253,320 attended the first five sessions of the opening three days, a record for the opening weekend of these championships.