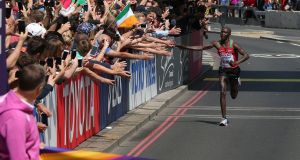 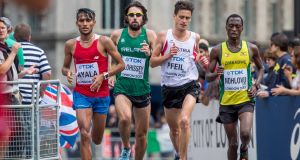 Ireland’s Mick Clohissey in action during the marathon at the World Athletics Championships in London. Photograph: Morgan Treacy/Inpho

Kenya’s Geoffrey Kipkorir Kirui prevailed in a compelling east African duel with Ethiopian Tamirat Tola on the streets of London to win the men’s marathon at the World Athletics Championships on Sunday.

Kirui, victor at the Boston Marathon in April, finally broke Tola, the fastest man in the field, with five miles of the 26.2-mile course left after they had gone head-to-head over the second half of the race.

At the 19-mile mark Tola had made his decisive effort and sped away from the 24-year-old Kenyan but within two miles Kirui had hauled back the lead before surging away immediately and emphatically.

Kirui forged on so powerfully that by the end of the race as he came towards the line at Tower Bridge, he even had time to tap the hands of some of the hundreds of fans lining the finish.

The Ethiopian, who had tired rapidly after Kirui’s second wind, just held on for silver by two seconds from the fast-finishing Alphonce Simbu, who won Tanzania’s second medal ever at a World Championships.

Britain’s Callum Hawkins then earned the biggest cheers from the big crowds lining the streets when he came home in a remarkable fourth place in a lifetime best 2:10.17 amid familiar African domination.

Dubliner Mick Clohissey was well satisfied with his 2:16.21 in 22nd place, a season best and going some way towards making amends for the disappointment of last year’s Rio Olympics, where he finished 103rd.

No such joy for Seán Hehir, running in London after coming off a difficult spell in training due to fatigue, and he ended up 63rd, his 2:27.33, over 10 minutes outside his best.

Enthusiastic spectators were crammed 10 deep at key points along the four-lap route which started and finished at Tower Bridge and took in some of London’s most famous sights like the Tower of London.

The bells chimed at St Paul’s Cathedral and they rang out for Kirui when he surged home alone on the last circuit, to complete a remarkable breakthrough year.

He had run a similar race in Boston, producing a late surge over the last few miles to destroy the opposition.

Now, in just his fourth marathon, he strode away majestically on an historic day when both the men’s and women’s races were staged.

On a fine, sunny late morning, the field of 75 had to negotiate a tricky, windy course with tight turns, especially when the runners entered the business area of The City, with the real contenders just sparring over the first two laps.

With the field having gone through half-way in 1:05.28, though Tola, Kirui and another Kenyan Gideon Kipkemoi Kipketer opted to make the race-changing move as they forged ahead.

The real shock, though, came from Hawkins who, evidently inspired by competing in his home championships, was perfectly happy to take up the pace over the first half of the race and then held on superbly to record the best ever finish by a Briton in a world championship marathon.

1 Gordon D’Arcy: Digging deep only recipe for Twickenham success
2 Robbie Henshaw and Bundee Aki to lead from the centre
3 Diego Simeone raises the roof with sideline spectacle
4 Jurgen Klopp: ‘welcome to Anfield, it’s not over yet’
5 Out of Bounds: remember when Darren Clarke usurped Tiger Woods?
Real news has value SUBSCRIBE