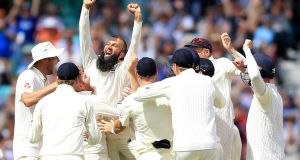 England’s Moeen Ali is mobbed by his team-mates after claiming a sensational hat-trick against South Africa during the third Test at the Oval in London. Photograph: Nigel French/PA

Spinner Moeen Ali finished off South Africa with a hat-trick as England completed a crushing 239-run victory in the third Test at the Oval on Monday to move 2-1 ahead in the series.

Moeen became the first England spinner to achieve a hat-trick in 79 years by dismissing centurion Dean Elgar, Kagiso Rabada and Morne Morkel soon after lunch in a dramatic end to the match.

England had laboured to bowl out the South Africans in the morning as Elgar continued his gutsy knock, although Toby Roland-Jones continued his fine debut by dismissing Temba Bavuma and Vernon Philander with successive balls.

Moeen finally ended Elgar’s dogged resistance for a 228-ball 136 and the spinner snapped up Rabada with the last ball of his over, both batsmen caught at slip by man-of-the-match Ben Stokes.

Moeen completed his hat-trick with the first ball of his next over, although he had to wait for a review to confirm he had trapped Morkel lbw.

The dismissal sparked wild scenes as the Oval celebrated its first Test hat-track in its 100th match – and the first by an English spinner since Tom Goddard in 1938.

“What a way to celebrate 100 Tests,” said captain Joe Root. “The game was really won by the way we batted in the first innings. The lads got stuck in and got a really good score on what proved to be a really challenging surface.”

The touring side, who began the day on 117-4, always knew history was against them, with a team starting the final day of a Test four wickets down having secured draws only three times.

For a while it looked like Elgar and Bavuma had not read the script, however, as they increased their fifth-wicket partnership to 108 before Roland-Jones sparked the first flurry of wickets.

The debutant seamer took his tally to eight in the match by snaring Bavuma (32) and Vernon Philander (0) lbw with full-length deliveries.

With blue skies and little cloud cover, batting conditions proved the easiest of the match and Elgar looked untroubled in reaching his eighth Test century and second against England.

But the tourists suffered a further blow to the last ball before lunch when Moeen had Chris Morris caught in the slips by Stokes for 24.

Suitably refreshed, Moeen mopped up the tail. Bizarrely, he was the third bowler, after Stokes and Roland-Jones, to take two wickets with successive balls in the innings before eclipsing his team-mates to claim his 18th wicket of the series.

The game proved just as one-sided as the previous two, with England winning at Lord’s by 211 runs before losing at Trent Bridge by 340 runs.

England will have the momentum going into the final Test which starts at Manchester on Friday as they eye their first home series win over South Africa since 1998.