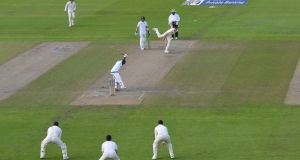 James Anderson displayed a neat sense of occasion and put England in charge against South Africa as his best Old Trafford Test bowling figures arrived when bowling from the end named in his honour.

Anderson excelled first as a number 11 batsman before returning to his day job as England’s all-time leading wicket-taker, picking up four for 33 on day two of the fourth Test.

He helped Jonny Bairstow to 99 as the pair added 50 for the last wicket in England’s 362 all out. And it then took the experienced paceman only three deliveries from the James Anderson End to have Dean Elgar lbw for a duck.

After a quiet middle session in which the hosts managed two wickets, Anderson returned to take three more for six runs as South Africa stumbled towards 220 for nine at stumps.

It was Bairstow who first lit up the Manchester crowd with some brilliant strokeplay as he made South Africa pay for a missed chance which would have ended England’s innings on 312, had wicketkeeper Quinton de Kock held a regulation catch when he was on 53.

He went on to produce a masterclass of batting with the tail alongside Anderson – who could muster only four runs but kept out 15 deliveries while Bairstow came up with a series of increasingly inventive and powerful shots among his 14 fours and a six over long-off.

Destiny was Anderson’s, though, on this occasion and he was not about to disappoint his home crowd.

In his two overs before lunch, he quickly brought about the dismissal of Elgar - a centurion at The Oval only five days previously.

Then after Toby Roland-Jones had bagged Hashim Amla for the third time in succession, caught behind off an innocuous delivery down the leg side, and Moeen Ali equalled his best of 19 wickets in a series when Heino Kuhn edged low to slip in an often dour afternoon, it was back to Anderson after tea.

Amla’s dismissal was also notable as a consolation ‘century’ for Bairstow, who claimed his 100th victim as England’s Test wicketkeeper – but if he was still hoping to vie with Anderson for top billing, he was soon left behind by a revitalised man of the moment.

Temba Bavuma’s vigil ended four short of 50 when he left one that snaked in just enough to lift the off-bail, and two balls later Anderson got rid of Faf du Plessis too – pushing forward but managing only an indeterminate edge back on to middle stump.

There was already variable bounce available, and Anderson would have had a third quick wicket had Keaton Jennings clung on to barely a half-chance diving one-handed to his left at third slip from a delivery that bounced and left a scoreless Theunis de Bruyn.

In the next over from Moeen, England would have got De Kock for just a single if Ben Stokes had clung on to another sharp one from an edged cut to slip.

Instead, the next breakthrough came again via Anderson – De Bruyn edging a drive to second slip.

Keshav Maharaj, who had just a single when Bairstow put down a thin edge off Moeen, passed the follow-on by hitting the off-spinner for a six over long-on to ease South Africa’s worries a little before falling plumb lbw to one that turned and hit him on the back foot.

After De Kock then edged Stuart Broad behind, and Ben Stokes pulled off an astounding catch at gully off the same bowler to see off Kagiso Rabada from the last ball of the day, England were truly in control.

They had resumed with 260 for six on a sunny morning, and were especially well served by Bairstow – whose first 50 came from exactly 100 balls and the next 49 from just 45.

He and Roland-Jones had a torrid time initially against Rabada, who claimed four for 91, and Morne Morkel.

Nightwatchman Roland-Jones poked a mistimed drive on the up straight into the hands of point off Rabada, and Moeen fell to the same bowler, edging low to second slip on the back foot before the deserving Morkel picked up his second wicket by bowling Broad off-stump.

Bairstow’s stand with Anderson must have been highly frustrating for South Africa, after De Kock put down England’s mainstay and prevented Rabada ending the innings with a five-wicket haul.

Bairstow had 94 when Anderson narrowly survived the tourists’ DRS gambit for lbw, after missing a reverse sweep at Maharaj.

But the England wicketkeeper was still one run short of three figures when he missed a sweep of his own and was lbw to the slow left-armer despite his attempt to overturn the decision on review.

His was a pretty good day, even so, but nothing on Anderson’s.