Justin Gatlin ruined Usain Bolt's farewell party when the 35-year-old American won the world 100 metres title in London sparking a chorus of boos from a crowd unhappy with his doping past. Video: Reuters 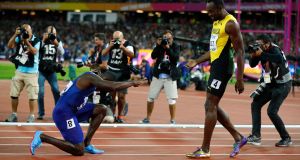 Justin Gatlin bows down to Usain Bolt after the men’s 100m final at the World Athletics Championships in London. Photo: Phil Noble/Reuters

We came as final witnesses to the fastest man who has ever run on this earth and suddenly found ourselves in a state of utter disbelief.

Usain Bolt beaten into third place – his first ever loss in a major championship – and, more disbelieving still, beaten by Justin Gatlin, the 35-year-old American who has served two doping bans in the past.

It was an upset unprecedented not just on the global athletics stage but perhaps all of sport, in that no one – or at least so few – had seen it coming.

Bolt’s start left him chasing the other seven men but there was nothing worrying about that: at 50m the young American Christian Coleman was still a half stride up, and suddenly Bolt was struggling. Gone was the big gear, that top end speed.

When he dipped for the line Bolt was chest-level with Coleman, in the lane next to him, but nailing the win outside them both in lane seven was Gatlin, clocking 9.92. Nothing world-beating about that but still good enough on the night, and his fastest of the season too.

Coleman won silver in 9.94, Bolt the slimmest of margins behind in 9.95, also his fastest of the season. Just not fast enough.

Bolt had, remember, only won this title the last time by .01 ahead of Gatlin, in 2015, and that was the fifth successive global silver medal for the American who won this World title in Helsinki back in 2005 – and kept that title despite failing a doping test a year later, which saw him banned from 2006-2010.

It was Bolt’s last monologue on the global stage and in the mad flashing of cameras and phones it took a while for the result to sink. Gatlin had been sarcastically booed on his entrance into the stadium, the realisation he had won greeted with a stunned silence.

Because Bolt is unquestionably of that status too, not just because we may never witness his likes again but because of the indelible mark his has left on sprinting and all of sport. Nothing about this result will change that.

He still retires largely unbeatable, although maybe the warning signs were there. A few weeks shy of 31, just over two hours earlier Bolt had also lost his semi-final, narrowly, to Coleman, the fastest man in the world this year with his 9.82. Bolt didn’t necessarily press it on that occasion, but was beaten across the line in a 100m race for the first time in four years.

Aiming for his fourth World championship 100m title, he must now be content with three – and six overall in the 100, plus still 11 World Championship gold medals – not to mention his eight Olympic gold medals in there as well.

Bolt is back here on Saturday evening with the Jamaican 4x100m relay team for the hip-hip-hooray, but this was his proper swansong, his last individual race before retiring. Gatlin had spoiled the party and although Bolt was gracious in defeat, praising the London crowd, no one expected him to go out like this. Least of all himself.

Before, the only person who could beat Bolt on this stage was himself – which is exactly what happened, at the 2011 World Championships in Daegu, when he false-started in the 100m final.

That had been his sole championship ‘defeat’ coming in here, and he’d won a sprint triple at every major championship since, including last summer’s Rio Olympics.

Although there was no doubt he’s slowing down. His 9.81 in Rio was the slowest of his Olympic titles, his 9.95 here by far the slowest of all his major finals.

In another lifetime they might talk about Usain Bolt and wonder what it was like to see him run. And what it must have been like to see him lose his last race. That hasn’t quite sunk in yet.