Brian Gregan on the blocks with the world’s top athletes

Irish runner pleased with sixth place in 45.42 seconds at the World Championships 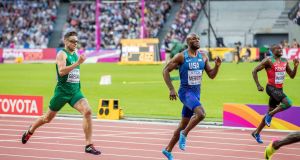 Ireland’s Brian Gregan on the way to finishing sixth in a 400m semi-final at the World Athletics Championships in London. Photograph: INPHO/Morgan Treacy

When Brian Gregan sat back in his blocks inside the Olympic Stadium he may not have seen Wayde van Niekerk two lanes inside him but definitely sensed him. Because van Niekerk is the best athlete in the world right now. Period.

The first and still only man in history to go sub-10 seconds for 100m, sub-20 seconds for 200m, and sub-44 seconds for 400m, with a world record to boot – his 43.03 for the one-lap at last summer’s Rio Olympics, run in lane eight remember, coming frighteningly close to 42-second territory.

At 25, the South African has come to London to reinforce that status, aiming for a 200m/400m double only once before achieved at World Championship level by Michael Johnson 22 years ago.

That Gregan didn’t see much of van Niekerk during Sunday night’s 400m semi-final was of little surprise then, the South African winning in 44.22.

Still Gregan was duly pleased with his sixth place, in 45.42, especially as former World and Olympic champion LaShawn Merritt only managed seventh, nipped on the finish line by the Irishman.

And that, reckoned Gregan, is more than most GAA players will ever achieve.

“The 400m is by far the most competitive event in the world right now bar none,” said Gregan, the 27- year-old who had come to London unbeaten in eight races this season.

“You look at some of our home-grown GAA players, and they are complaining about trying to get into their national final, saying us athletes aren’t doing enough, this, that and the other. We’re not getting anything.

“I had the best runners in the world around me, as much as an Olympic final, gold and bronze from last year’s Olympics, so fairly satisfied. And finishing ahead of many of the top Europeans. That sets me up with a huge amount of confidence for next year’s European Championships. It’s an amazing experience out there.

“I beat the former Olympic champion, and World champion, and end up ranked 19th in the world [across the three semi-finals]. When you’re running PBs every week it’s hard to get better and better, but now I’m consistent at 45.3, 45.4, and I think I can drop that further in a one-off race.”

Gregan was equally emphatic about the way he was doing it. For all the suggestions that athletics is largely tainted by doping, Gregan reckons most of those world class athletes around him are running clean as well.

“Well I’m clean,” he said. “There’s always been cheats in my event. But I do think the European athletes are clean.”

Thomas Barr was also asked about the backdrop of doping after qualifying for his 400m hurdles semi-final, specifically about Justin Gatlin’s win over Usain Bolt on Saturday night:

“It was a shock, obviously. And the fact Gatlin has had two doping bans he shouldn’t be in the sport. But at the same time there are other people out there who have cheated, and probably are cheating, and they’re not getting booed.

“I think people just want that villain, the Batman and the Joker, and maybe in some ways the sport needs it. I don’t feel for him for what he’s done, but felt for him for that [the booing].”

Van Niekerk, meanwhile, may well need to go close to his world record – or improve it – to win Tuesday’s final: Steven Gardiner from the Bahamas won the first semi-final in a national record of 43.89, and Isaac Makwala from Botswana won the third semi-final in 44.30.

Last month Makwala became the first man in history to rub sub 44-seconds for 400m and sub 20-seconds for 200m in the same night.

There are world class athletes. Period.