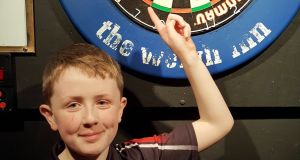 Darts player Alex Hughes has qualified for the Worthington’s Champion of Champions finals in Wales at the age of 11. Photo: Joe Boland/NorthWestNewsPix

An 11-year-old Donegal schoolboy is making waves in the darts world after qualifying for a €22,000 (£20,000) champion of champions final.

Alex Hughes, from the small village of Inver in south Donegal, has qualified for the Worthington’s Champion of Champions finals in Wales later this month.

At the weekend, Alex competed in his first full men’s tournament just four days after celebrating his 11th birthday – and won the event at Kirk’s Bar in Clady.

Alex used to carry a small stool in a rucksack to enable him to collect his darts from the board.

“When he started off he couldn’t reach the darts at the top of the board, but he’s grown a good bit in the last two years,” proud dad Peter said.

Over 40 registered players, including players from the PDC Development Tour, took part, but young star Alex made light of them all.

Alex landed a superb 130 checkout in his semi-final.

In the final, Alex – who throws under the moniker ‘The Hunter’ – defeated Alan Byrne.

“This is my first ever full men’s event win and I cannot believe how happy I am,” Alex said.

“I’ve practiced every day for the last two years so to play in full men’s events like the Champion of Champions is a dream come true”.

Alex will compete in the finals at St David’s Hall in Cardiff on August 26th when 246 players will play off to become the Red Dragon Champion of Champions.

All in the Game: Beans didn’t provide the magic for Crouch 10:00
Kansas City Chiefs to meet San Francisco 49ers in Super Bowl 09:12
Coco Gauff beats Venus Williams again in Australian Open 08:35
No sign of ring rust as Roger Federer starts fast in Melbourne 08:38
Leinster to meet Saracens in Europe, Corofin and Ballyhale make history 08:20
Here is your handy guide to sport on television this week