Chris Froome was spat at, Vincenzo Nibali forced out of race and a flare fired at peloton 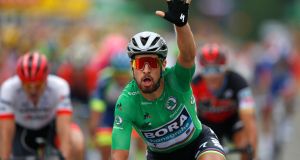 Christian Prudhomme, the director of the Tour de France, appealed for calm after tensions increased following Thursday’s chaotic climb of Alpe d’Huez in which Chris Froome was jostled and spat at, and his rival and former Tour champion, Vincenzo Nibali, was forced out of the race after crashing because of a spectator.

“We need to restore calm and respect all the riders,” Prudhomme said. “It was a very annoying climb of Alpe d’Huez. The riders on the Tour, and champions of the Tour, must be respected, as they are by the large majority of the public.

“It was very calm for 10 days, with only a few anti-Froome or anti-Sky placards, but at a stroke, it all went up again.”

But Prudhomme’s appeal for calm seems to be falling on deaf ears, as was demonstrated towards the end of stage 13 when a lit flare was lobbed into the peloton from the side of the road.

The cumulative effect of serial doping scandals, from the Festina Affair to the Armstrong scandal, is that there is less respect for the Tour peloton now than 20 years ago. Meanwhile, the knives that have been out for Froome and Team Sky since the Grand Départ in the Vendée are now being sharpened.

The 13th stage of the Tour, from Bourg d’Oisans to Valence, raced by a peloton shorn of many big-name sprinters, was won with a degree of inevitability by Peter Sagan but the day’s events were overshadowed by the aftermath of the chaos on Alpe d’Huez.

Nibali was forced to leave the Tour following his crash. The 2014 champion, chasing Froome through a pall of smoke caused by roadside flares, was brought down by a strap hanging over the barriers from a spectator’s camera.

After a 120km round trip to and from Alpe d’Huez to Grenoble hospital, where his fractured vertebrae were confirmed, Nibali was visited late on Thursday night at his hotel by an apologetic Prudhomme. The Italian is likely to return to racing at the Vuelta a España, while his team, although angered by his crash, are not expected to take any further action.

“It’s a paradox that Vincenzo Nibali, who has nothing to do with Team Sky, ended up on the tarmac,” Prudhomme said.

Asked about that incident and about his own treatment by spectators, Froome was critical. “During the race, it’s the responsibility of the organisers to protect the riders,” Froome said.

Although Team Sky’s principal, Dave Brailsford, added that “you expect professional athletes to play and entertain without being impacted on by the crowd”, the team’s head of technical operations, Carsten Jeppesen, told the Guardian that rider security on the Alpe had actually been improved.

“They have done a lot more than usual,” Jeppesen said of the race organisers, ASO. “I think they’ve done a really good job actually. ASO takes it seriously and they are trying to bring in more cops and make sure that certain key points are taken care of.

“Luckily Chris was not knocked off by the guy that pushed him, but it’s Alpe d’Huez. It’s not the first time something like that happened there. It is one of the iconic places in the sport, and there was also a lot of British fans out there and a lot of support.”

Despite that, Froome and Thomas were booed yet again at the start village for stage 13 in Bourg d’Oisans, although on the boo-ometer, it is apparent that it is Froome, rather than the Welsh man, who is seen as the villain of the piece.

The French media, now expecting a sixth Team Sky win in seven years, have also picked up the baton. Team Sky was described as the “snake with two heads” by Libération, while L’Équipe said that “when you wear the jersey of the British team, suspicion is as contagious as herpes”.

The physicality of Thomas’s strength to sprint clear of his peers at the top of the exhausting climb to Alpe d’Huez brought comparisons with Eddy Merckx from one veteran in the press room. But it also brought eye-rolling and derision from others, baffled by Sky’s continuing production line of Grand Tour contenders.

Meanwhile, some believe that Thomas is merely Froome’s stooge, a glorified lead-out man, there to take the sting out of world time trial champion Tom Dumoulin’s speed before the final and potentially decisive time trial next Saturday to Espelette.

But what if Thomas is the one bluffing? What if Sky harbour doubts about Froome’s capacity, after his win in the Giro d’Italia, to rise to the challenge of winning his fourth Grand Tour in a row, a feat that, incredibly, would equate to being unbeaten for three whole months of racing?

What if, rather than being simply a decoy for the under-fire Froome, jeered and jostled from the Vendée to Valence, it was always all about Thomas, and enabling him to profit from Dumoulin’s focus on marking Froome? In Team Sky’s long history of befuddling cycling’s establishment with doublethink and contradiction, that might yet be the greatest coup of all. – Guardian