Papa John’s scandal offers an important takeaway for US sport

America at Large: Pizza company founder’s use of N-word led to immediate backlash 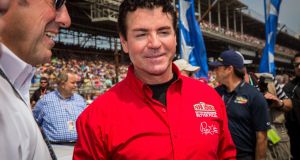 In the small Indiana town of Jeffersonville, Nachand Fieldhouse was a landmark. Originally built as a high school gym, it evolved over 80 years into the basketball headquarters for the entire hinterland. When the building started to show its age last summer, a cry went up to save this sagging piece of sporting and cultural heritage.

Though long domiciled in Kentucky, John Schnatter heard the pleas coming from his hometown and immediately pledged $800,000 (about €688,000). For that princely sum, the authorities agreed to put the name of the local boy made good over the door. Last week, those letters came down. In a hurry.

Like everybody else ever touched by Schnatter’s largesse or who had a commercial relationship with his Papa John’s pizza company, the burghers of Jeffersonville no longer want to be associated with him.

The rush to cut ties was prompted by the revelation that Schnatter used a racial slur during a conference call with a marketing team back in May. As part of a media training exercise, he wondered aloud why Colonel Sanders of Kentucky Fried Chicken fame never got any stick for calling black people the N-word, and then riffed bizarrely on the days in Indiana when they were dragged behind trucks and lynched.

His ham-fisted attempt to explain himself, claiming he felt provoked into using the N-word, merely compounded the controversy. In a matter of days, he had resigned as chairman of the pizza company and was evicted from his office at Papa John’s, while all mention of him was scrubbed from its website.

Very quickly, the New York Yankees, the Atlanta Falcons, the Miami Marlins and a host of other teams who had exclusive deals with his company announced they would no longer carry the brand. The University of Louisville, where he also served on the board of trustees, moved to change the name of Papa John’s Cardinal Stadium and to try to pretend he had never been one of its biggest donors.

In many way, Schnatter’s fall was as precipitous as a rise that has always been considered a great American business story.

He began making pizzas at Rocky’s Sub Pub in Jeffersonville at 15. Impressed by the fact a piece of food that cost $2 to make could be sold for five times that sum, he started Papa John’s Pizza once he graduated college, its first premises a cleaned-out broom closet at the back of Mick’s Lounge, a bar his father had purchased. That was 1984. Today, there are more than 5,000 Papa John’s franchises worldwide and his personal fortune is estimated to be about $800 million.

It might be slightly less than that now because shares in the company have lost one-third of their value in the past year, the shedding at least in part due to repeated missteps by Schnatter himself.

Even before getting exposed for using the N-word, he had turned off many customers and commercial partners.

Asked to explain a downfall in sales last November, he blamed the plummeting figures on the ongoing controversy surrounding NFL players kneeling for the national anthem before games.

“The NFL has hurt us by not resolving the current debacle,” he said.

His reasoning was that the protests were turning fans away and if they weren’t watching the games on television they weren’t ordering Papa John’s, official pizza supplier to the league. Even the NFL, a body that has disgraced itself in its treatment of outspoken footballers, couldn’t stand for that.

Soon after, they ended the commercial relationship, a move that forced Schnatter to step down as CEO. He had to go then because this was a lot more than just losing a lucrative deal with the biggest sport in the country.

Papa John’s and its founder, always gurning in a red logoed shirt, had become synonymous with the national sport. Schnatter had starred in a series of television commercials with Peyton Manning, the celebrated quarterback who once owned 31 lucrative Papa John’s franchises in and around Denver, a city where sales spiked after marijuana was legalised. Their ads might have been from the “so irritating you can’t forget them” school of marketing but they worked, and simultaneously turned a businessman into a household name across America.

That sort of recognition was invaluable for the company, until it turned out his genius for pizza-making and marketing was matched only by an ability to put his foot in his mouth.

In 2013, as Obamacare was set to pass, he complained that having to provide compulsory health insurance to full-time employees was going to add 14 cents to the cost of every pizza. Given his personal wealth, the fallout from that remark was predictably toxic, and late night comic Stephen Colbert mocked his claim by pointing out: “That’s three times the value of a Papa John’s pizza!”

Perhaps because of how he rode out that particular scandal, Schnatter has been going around for the past few days claiming he was wrong to step down as chairman. Those who know him would have expected that from a 56-year-old who famously promised never to retire. The problem is the company he created cannot compete with Domino’s and Pizza Hut as long as his image remains on the boxes.

“Better ingredients! Better pizza!” he shouted during all those commercials with Manning as his sidekick. Better people now required too.