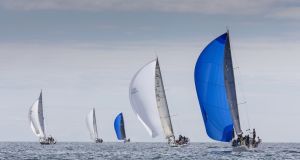 A nip and tuck start to the 130 nautical mile Fastnet race marked the beginning of Volvo Cork Week off Haulbowline on Monday morning as 15 crews competed for the second Beaufort Cup series for military and rescue service crews.

Defending titleholders from the Irish Defence Forces on Joker 2 led by Commandant Barry Byrne took a brief early lead but a gybing duel ensued with Youen Jacob’s Baltimore RNLI crew who took over.

The lifeboat team upped their game since 2016 when they placed second to the Defence Forces and are sailing a J109, a sistership to Joker 2 and have added former Olympian Peter O’Leary to the team.

Crews must have at least half the team drawn from the service they represent while O’Leary normally declares for Baltimore Sailing Club.

However, both boats along with the remainder of the fleet were given the slip at Roche’s Point when Tánaiste and Minister for Foreign Affairs Simon Coveney jumped into the lead on his own chartered J109 Jedi, and appeared to be holding first place as the leaders neared the famous lighthouse off the west Cork coast on Monday evening.

Meanwhile, the main event fleet also started racing on Monday with a four-hour coastal race between Ringabella and Power Head. The starting-area off Weaver’s Point and close to Roche’s Point also doubled as the finishing area and proved to be highly-challenging in the light winds and strong tide.

However, once into open waters south of Cork Harbour flat seas with breeze made for ideal racing conditions.

More of the same is expected for a second day of coastal racing on Tuesday before the event stages its famous Harbour Race on Wednesday. Shorter courses, including Olympic and Windward-leeward races, will decide the series on Thursday and Friday.