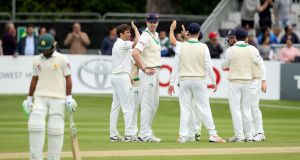 Ireland celebrate the dismissal of Asad Shafiq bowled by Tim Murtagh during the first Test match at Malahide last May. Photo: Oisin Keniry/Inpho

Ireland will play England in an historic four-day Test match at Lord’s next July, the ECB has confirmed.

A meeting with England has been in the pipeline for a while since Ireland gained Test status and it has now been confirmed for Wednesday July 24th to Saturday July 27th.

They will also welcome England for a one-day international in Ireland on May 3rd.

The Test match will take place in between the Cricket World Cup and England’s Ashes series against Australia and will be Ireland’s second Test of the year after they take on Afghanistan in February.

The venue for that game has not yet been confirmed but it will be away from home and most likely in India.

Ireland lost by five wickets to Pakistan in their inaugural Test in May.

ECB CEO Tom Harrison said: “We fully supported the ICC’s decision to award Full Membership to Cricket Ireland and we expect next summer’s inaugural Test match at Lord’s against our neighbours to be an historic celebration for all Irish cricket fans.

“It will also provide excellent Ashes preparation for England against an Irish team whose impressive performance against Pakistan earlier this year showed they can compete strongly in this form of the game.”