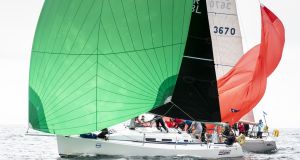 In a nail-biting conclusion to Volvo Cork Week, a full three-race programme was sailed on the final day in spite of fears that light winds would curtail the schedule.

That prolonged the test for several classes, including the Beaufort Cup for military and rescue service crews where Comdt Barry Byrne and an Irish Defence Forces crew on John Maybury’s Joker 2 were defending their 2016 inaugural event win.

With Baltimore’s RNLI lifeboat crew, led by Youen Jacob and with former Olympian Peter O’Leary advising on tactics, within touching distance of first place on Andrew Algeo’s Juggerknot, the series hung on the outcome of the final, bonus scoring race.

Byrne’s team held a narrow lead but just needed to sail conservatively and continue his record of top three places in the 16-boat class from the week.

Instead, he was over the starting line early and was obliged to return and restart the race.

Working back up the fleet, Joker 2 did well to finish sixth but their overall win was secured when Jacob’s team could only manage third place in the race after getting caught on the wrong side of a wind-shift.

Byrne’s team won with two points to spare and their €10,000 charity purse will be donated to Crumlin Childrens’ Hospital and RNLI lifeboats.

Meanwhile, Rory Fekkes from Carrickfergus Sailing Club lifted the overall trophy for the week after winning Class 4 IRC on Fn’Gr8 with a massive 19-point lead. He easily secured the overall win before the last race but continued on and took his sixth win in the ninth and final race.