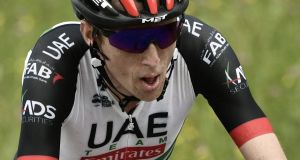 Dan Martin is hoping the injuries sustained in a stage-eight crash will not slow him down now the Tour de France has reached his favoured terrain in the mountains.

The Irish rider celebrated victory on the Mur-de-Bretagne on stage six but was among the general classification hopefuls caught out in the chaotic opening week of the Tour.

He crashed heavily on Saturday’s stage eight to Amiens and suffering cuts and bruises on his back, hip and elbow.

“The power is still there and the condition is still good,” the UAE Team Emirates rider said during Monday’s rest day.

“It’s far from ideal, if you crash on the Tour de France it’s going to impact your recovery on a long-term scale but though yesterday was difficult the rest day has given my body a chance.”

The last thing Martin needed the day after a heavy tumble was a stage over the rough cobbles of northern France, but that is precisely what Sunday’s stage nine to Roubaix delivered.

Martin dodged the carnage which ended Richie Porte’s race and caught out Chris Froome, Rigoberto Uran and Romain Bardet among others, and managed to come out smiling.

“The main thing for me was to not crash,” he said. “There was a bit of a fear factor, when you’ve had a really scary crash and you go back into that battle zone, it’s hard psychologically.

“But what an experience it was. It was kind of cool to race the cobbles. That’s how I’m approaching this whole Tour de France, just to enjoy it for what it is. It’s a crazy moving circus around France and every day is different.”

Though he finished with a smile, posting pictures alongside his team-mates of their dusty faces, Martin revealed there was at least one x-rated picture that was held back as some of his stage eight wounds reopened.

“There was blood seeping through my jersey,” he said. “I had one pretty disgusting photo of my jersey at the finish line but the guys said, ‘You can’t really post that’ and I guess they were right.

“But it’s kind of remarkable how I’ve bounced again. I’ve got a big bruise on my back and on my hip but from the waist down there’s barely a scratch and that’s the bit that makes the bike go forward.”

Aside from the bruises the bigger concern for Martin on stage eight was a loss of 76 seconds which saw him slip to 24th overall, three minutes 22 seconds off yellow and almost two minutes down on the likes of Froome and several other overall contenders.

Martin arrived in France looking to test himself in the general classification after defying two broken vertebrae in his back – suffered in a stage-nine crash – to finish sixth overall last year.

Though he has yet more bumps and bruises, he is not changing his approach to the race.

“That’s what I keep thinking to myself,” he said. “It isn’t easy, but it’s easier than last year.”