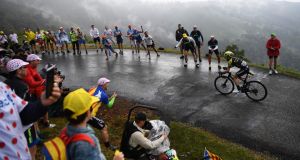 Dan Martin put in a brave fight on Sunday’s 15th stage of the Tour de France, bouncing back from Saturday’s disappointment to go in the day’s big breakaway. He and first cousin Nicolas Roche (Team Sunweb) were part of a 28 man break which got clear early on, and made a further selection when the move dropped to 16 riders on the climb of the Port de Lers.

Martin had been under pressure early on but appeared to gain strength as the stage continued. Roche eventually slipped back but Martin was still to the fore heading into the final ten kilometres. However he cracked when Spanish rider Mikel Landa (Movistar Team) bridged across from the peloton inside the final ten kilometres and forced the pace.

“It was brutal out there today,” said Martin. “We expected a big group to go early and after the disappointment of yesterday I wanted to be in the race again and enjoy racing. I didn’t think they were going to let me go. I waited until it was really hard, and then made the split on the climb.”

He eventually finished 21st, three minutes 38 seconds behind the stage winner Simon Yates (Mitchelton-Scott), who had also been in the break. Roche placed 64th.

“I’m looking forward to the rest day now,” Martin continued. “I’ve been riding GC [general classification] for two weeks and obviously yesterday it didn’t go to plan. I was just a little disappointed today that I got caught when I did. Today was probably the hardest day I’ve ever done on the Tour de France.”

It is not clear why Martin’s form dipped on Saturday, but he will be hoping to be back to his usual level and to land a stage win in the final week of the race. He climbs one place to 15th overall, while Roche is 37th. The Tour has a rest day on Monday, with racing resuming on Tuesday with an undulating stage to Nîmes.