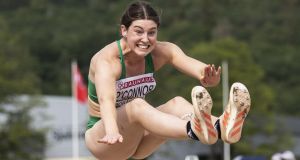 Kate O’Connor competes in the long jump during the Heptathlon in Sweden. Photo by Maja Hitij/Getty Images for European Athletics

One small step for Irish athletics, one giant leap for Kate O’Connor, who in winning the heptathlon silver medal at the European Under-20 Athletics Championships in Borås, Sweden has also written her own little piece of history.

No Irish woman had ever before won a championship medal at any level in the heptathlon, the seven-event disciple demanding all-round talent and athleticism, and O’Connor had already made sure of it going into the final event, the 800m metres.

The 18 year-old from the Dundalk St Gerard’s athletics club, who is coached by her father Michael O’Connor, was racing to determine which colour, and in the end was rewarded with silver, her total of 6,093 points also smashing the existing Irish senior record. It was that good - the first time any Irish woman has surpassed 6,000 points.

Just 15 points had separated the top three going into the final event, the 800m, O’Connor sitting a close third behind the leader Annik Kalin, the 19 year-old from Switzerland, with Maria Vicente of Spain lying in second.

It was the near complete all-round performance for the young Irish woman: over the course of Friday’s three events, O’Connor first went out to 5.73m in the long jump, with that dropping down to fourth, before producing the throw on her life in the javelin - her 52.92m an outright Irish under-20 record, further than any Irish woman of her age has thrown.

So to the two-lap finale, with O’Connor closing out the deal to take silver. The only Irish man to medal in a major championship multi-event before also came at this level, when Barry Walsh won decathlon bronze in the 1987 European Under-20s in Birmingham.

O’Connor had put herself on a medal footing early on after a super start in her first four events on Thursday, clocking 14.61 in the 100m hurdles, clearing a personal best of 1.81m in the high jump, throwing 13.41m in the shot put and then clocking another personal best 24.82 in the 200m.

It also pushes out to 16 the number of medals won by Irish athletes at European Under-20 level, which began back in 1964 with the European Junior Games in Warsaw. Her 6,093 points also improves the Irish senior record of 5,815, set last summer by Liz Morland.

Ireland’s fastest schoolboy Aaron Sexton also looks poised to sign off on his athletics career with a strong challenge for a medal in the 200m. The Bangor athlete, already signed to the Ulster Rugby Academy once he gets home, cruised through his heat to take the win in 21.17 - clearly with plenty more to spare.

The fastest in the event with his best of 20.69, Sexton still has to negotiate Saturday morning’s semi-finals before final takes place later in the evening, but everything about his heat performance suggests he’s in top form. Reality Osuoha also made it through for Ireland in his heat, clocking 21.80.

“Obviously it was just a heat, so just did what I needed to do to qualify, and just excited now to see what happens in the next two rounds,” said Sexton. No Irish sprinter has ever before won a medal at European Under-20 level.

Davicia Patterson also cruised her way into the final of the women’s 400m, the 18 year-old from the Beechmount club in Belfast the fastest across the two semi-finals with her 52.81, a repeat of that on Saturday evening is sure to see her right in the mix for gold.

Sophie O’Sullivan did bow out her in semi-final of the 800m, finishing in eighth in 2:11.53 after bravely going with fast pace, the first lap passed in 60 seconds. Still set for the high jump final on Saturday is World U-20 silver medallist Sommer Lecky, with Sarah Healy, who won double gold over 1,500m/3,000m at the Under-18 championships last summer, also through to her 1,500m final on Sunday evening, fittingly one of the last track events.