Murphy embracing new challenge as she maintains her Olympic dream

Former silver medallist Annalise Murphy and her teammate Katie Tingle are bidding to qualify for Tokyo 2020 in a 49erFX. 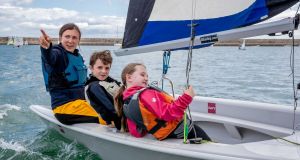 At the helm of a boat she is the epitome of Zen but, behind a steering wheel, she sings along to the radio with wild abandon.

Not very well, she stresses, but very loudly, and with no qualms about the musical cheese quotient.

It’s a pretty useful distraction when your sport includes the mind-numbing monotony of driving a van and boat trailer to regattas all across Europe.

According to the Googlemeister, Annalise Murphy’s most recent schlep – from Germany (Kiel) to Rotterdam to get the ferry to Hull – would take six hours yet, with boats in-tow, it took closer to 10 and she made the ramp with only 15 minutes to spare.

But sometimes her karaoke-driving habit can leave her a little red-faced.

“I was in traffic on the N11 with the window down last week, singing away and this guy in the car beside me took a picture!

“I was like ‘you can’t do that man, put your phone down!’” she chuckles. “I really need to get my name off the side of my truck.”

Since that very public discomfort of finishing fourth in London 2012 and her silver medal redemption in Rio 2016, Murphy is instantly recognisable, even though most of us haven’t an idea about sailing or just how physically tough, mentally resilient and fiercely independent she is.

There’s a small plaster on the back of her discoloured left hand at the moment.

“Ah no, I was cutting down trees with mum in her bit of forest in Roscommon and one fell on me. It got infected and my whole hand swelled up,” she grins, complete with self-deprecating eye-roll.

Humour is another of Murphy’s gifts but don’t let that fool you. Only someone as doggedly competitive as she would be going back for a third Olympic sailing campaign in an entirely new boat class that, literally – and a few times daily – throws her in at the deep end.

She reckons she was sailing one well enough “to win an Olympic medal when I was 19 or 20, but I just didn’t have the mental ability to do it”.

Now she’s strong enough mentally but struggling with the sailing element of trying to qualify for Tokyo 2020 in a 49erFX, a notoriously capricious two-person skiff.

The odds are stacked against herself and her new partner Katie Tingle.

Murphy’s decision to crew on the Volvo Round the World Race last year may have renewed her love for Olympic sailing and prompted this new challenge, but it also meant starting it two years later than most of their opposition.

Tingle was a brilliant youth sailor but was teaching primary school and yoga and just sailing socially when Murphy approached her.

They weren’t long together when the Cork woman broke an arm in training last September, necessitating surgery and four months off the water.

Then there’s the boat; like leaping from a Fiat Punto into a Porsche.

The 49er is the Formula One of Olympic sailing or as Murphy says: “Like a wild animal really. The sail area is so big that it’s got a lot of power. It just wants to go fast, so the entire time we’re trying to rein it back in.”

In the Laser she was always seated and, mentally, always two or three manoeuvres ahead.

Now, as a 49erFX helm, she’s either standing or throwing her weight about on a harness and is constantly wrong-footed, though Tingle, as crew, does even more of the gruelling physical work.

Their Welsh coach Ian Barker, an Olympic silver medallist in this class, says “if anything can go wrong in a 49er it will”.

Results in their first three internationals underline that.

At the World Cup in Genoa in April, they finished 41st of 49 crews.

At the European Championships a month later they came 51st of 57 and, at Keil Week last month, they were 33rd of a field of 63 boats.

Yet sailing’s format – a series of qualifying races and then three different fields of ‘medal’ racing – means final standings can be deceptive.

“In Weymouth [the Europeans] we had three or four really good races in qualifying, were doing really well but then capsized. That’s just [more] time in the boat and handling.

“The qualifying series in Kiel was just six races and we had a third and a fifth. We were actually winning four of the six but I jumped out of the boat in one and Katie jumped out in another. You’re just going so quickly that a small slip suddenly turns into a massive problem.”

Even a sailor of Murphy’s quality and courage finds the speed frightening.

“Oh yeah. Sometimes I’ll be in the back of the boat going ‘everything’s fine Katie, we’ve totally got this!’ but I’m actually terrified.”

To qualify for the 2020 Olympics they’ll need to make the gold fleet (top 25), at least, at the World Championships in New Zealand in December and hope the cards fall in their favour elsewhere, though a few final places could still be up for grabs at next year’s World Cup in Genoa.

Murphy believes they can defy the odds and even possibly be medal contenders. She cites Cime Fantela, a Croatian who won gold in the 470 class in Rio and is now partnering his brother in a 49er.

“He basically found the first year and a half really hard, but then they won last year’s World Championships. Cime told me it suddenly all clicks and then you’re able to use all of your other racing [nous]), so that’s what we’re aiming for.”

But they started late and Tingle’s injury was an undeniable setback. Their learning curve has been not so much steep as vertical.

Yet Murphy’s appetite and optimism is indefatigable and she’s actually bolstered by her testing ocean-racing experience in 2018.

She hated a lot of it but came away with two epiphanies.

“I learnt I’m not a quitter. I’ve never wanted to quit at anything before – well maybe French in secondary school because I was really bad at it – but I really did want to quit. I just thought I’m not able to do this.

“So when I got to the Volvo finish line I was really proud of myself. Not just that I hadn’t quit but that I’d worked so hard for the whole race and tried to be the best team player I could be.”

The second could prove even more useful.

“It’s only since I came home I realised that people find it really hard to let go of things. They get offended really easily.

“Everyone’s dealing with their own stuff and you just have to see that they’re probably having a bad day. At the start of the Volvo, if someone was nasty to me – and they were – there was no escape from it and you’d be feeling pretty sorry for yourself.

“Then you realise they hadn’t slept in three or four days, or the freeze-dried food was making them sick or whatever.

“Being able to let go of things now, it’s actually great. Something will annoy me for a few minutes and then I’m like ‘you know what, I can’t change it, and that person has probably forgotten about it already’. So I just let it go and get on with things.”

Herself and Tingle, whom she knew socially before, have proven remarkably compatible.

“Honestly, it’s like we’re the same person only I’m a foot taller than her!

“I was behind her in the boat a few days ago, watching some waves, thinking to myself ‘I’m just going to jump that wave when it gets here’ and we both jumped it at the exact same time!” she laughs.

And what has most surprised her new partner?

“I had no idea how amazing Annalise’s mental game is,” Tingle says. “I’ve done a lot of yoga teaching over the years and I’m still so surprised by a lot of the things she comes out with.

“It’s like ‘yeah, that’s that [new] thing people are all talking about these days’ and you discover that Annalise has been doing it all along.”

Next step on their breakneck journey is to Japan in a fortnight, for two consecutive regattas on the 2020 course; an Olympic test event and a World Cup.

“And then we’ll come home and train like maniacs for the Worlds,” Murphy grins, and you don’t doubt that for a minute.