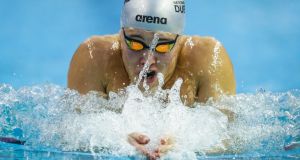 Darragh Greene has qualified for the 2020 Tokyo Olympics after swimming an Irish record in South Korea. Photograph: Oisin Keniry/Inpho

Darragh Greene has secured qualification for the 2020 Tokyo Olympics after he swam an Irish record in the heats of the 100m breaststroke in South Korea.

Greene became the first Irish swimmer to go under the Tokyo qualification time at the 2019 Fina World Championships, clocking 59.82 in Gwanju.

However it was a bittersweet result for Greene, who missed out on a place in the semi-finals after finishing in 17th place in the heats - the first time ever a 59-second swim has not been enough to secure a place in the World Championship semis.

After the race, Greene said: “Bit of mixed feelings with the result, I can’t complain, I stood up, did a job, got my pre-validation for the Olympic Games in Tokyo, so to do that first day of the competition, yeah I’m happy.

“It really is a tough competition, to stand up with the worlds best, everyone’s swimming fast so it’s good to get that under the belt.”

Templeogue Swimming Club’s Ellen Walshe made an impressive debut in her first senior international event. 17-year-old Walshe swam her third fastest time ever in heat three of the 100m Butterfly where she finished in 7th place in 1:00.85.