Thomas Barr cool and clear over first hurdle in Doha 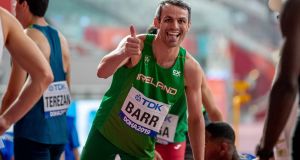 Ireland’s Thomas Barr after finishing second to qualify for the 400m hurldes final at the World Athletics Championships in Doha. Photo: Morgan Treacy/Inpho

Cool as the stadium air conditioning, Thomas Barr safely cleared his first set of hurdles at the World Athletics Championships in Doha with room and time to spare.

Running in the first of five heats of the 400m hurdles, Barr looked perfectly comfortable too when finishing second to defending champion and gold medal favourite Karsten Warholm from Norway, although the times at least are about to heat up considerably come Saturday afternoon’s semi-finals.

Barr clocked 49.41 seconds to Warholm’s 49.27, the first four finishers in each heat guaranteed a place in those three semi-finals (set for 4.05pm Irish time): making the final will require something a lot quicker, Warholm running a European record of 46.92 at the Zurich Diamond League last month, the second fastest ever.

Only the top two, plus the two fastest non-qualifiers, will progress, but Barr has given himself every chance and that’s good enough for now. This, remember, in a near flat-out lap of the track lined with 10 hurdles, each three-foot high, where anything can and often does go wrong, and where Barr did everything right, coming off the final bend in lane seven in third place, before nailing his final sprint to claim second ahead of Jabir Madari Pillyalil from India (49.62) and India and the Jamaican Kemar Mowatt (49.63) who also qualified automatically.

This, remember too, is considered one of the most competitive events in Doha, with the times to prove it: three of the world’s four fastest men in history will line up in the semi-finals, Warholm, the American Rai Benjamin (who ran 46.98 in Zurich), home favourite Abderrahman Samba, the Qatari athlete who dominated the 2018 season, recording his best time of 46.98.

None of them broke 49 seconds in qualifying, but there is talk of them bettering the world record of 46.78 set by the American Kevin Young when winning the Barcelona Olympics back in 1992, at least come Monday’s final.

After seeing his 2017 World Championships go down the toilet due to the outbreak of gastroenteritis in London two years, Barr also has the confidence too of winning the European bronze behind Warholm in Berlin last summer, and believes he can get back into sub-48 second territory.

“I felt nice and relaxed, the aim was to stay relaxed down the backstretch, and around the top bend, where sometimes I falter a bit, and then just see what I had coming home,” he said. “I was in good contention coming down the home straight so I was actually able to ease off a bit, didn’t need to go hell for leather, so definitely more in the tank for tomorrow.”

At least the searing won’t be an issue – the Khalifa International Stadium fully air conditioned to a pleasant 24-26C: “Conditions are fine, perfect outside anyway, a nice fast track, and like a balmy Irish evening in Morton, really. I know it will take a sub 48.5 to make the final, a 48-low, so I know that will mean one of the fastest times of my life. And I know they’ll be dropping a couple of gears tomorrow, everyone was on cruise control today. But I felt very good, really relaxed, and I always build off that, race after race, so I am quietly confident.”

Barr will go in the third semi-final, again drawn in lane seven, only with both Benjamin and Samba in the lanes inside him.

Michelle Finn was also in action on day one in the 3,000m steeplechase heats: her season best of 9:41.23 ranked her 13th fastest in the field of 15, and not helped by some hesitation at the very first hurdle, she finished ninth in 9:47.44, the heat won by Kenya’s world record holder Beatrice Chepkoech in 9:18.01.

“I miss-judged the first barrier a little bit, and found it hard to get onto it after that,” said the 20 year-old Finn. “The temperatures weren’t really a problem once we got going, more cool and breezy, but I’m a little disappointed as I felt I’d a bit more in me.”

Mark English is out on Saturday in his 800m heats, with Brendan Boyce also reporting to be in the best shape of his career going into the gruelling 50km walk, starting at 11.30pm local time, only with no air conditioning to ease the searing heat.

The Irish in Doha on Saturday (all times Irish)