Distance running in Doha: can Team Ingebrigtsen save Europe’s face? 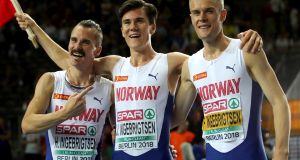 There was a time the name might roll off the tongue without a second thought. Steve Cram. Noureddine Morceli. Hicham El Guerrouj.

Who is the World 1,500m champion? Elijah Manangoi.

Who is the World 5,000m champion? Muktar Edris.

The sport has come a long way in the now 36 years since the first World Athletics Championships, and what started in Helsinki in 1983 wasn’t just some fresh alternative to the Olympics, but the first athletics event to properly rise above them, coming as they did smack bang in the middle of the boycott era.

There was no prizemoney in Helsinki, no world record bonuses, and not a single positive doping test. This despite the fact the systematic dopers that were East Germany topped the medal table, winning 10 gold medals, while certain other performances (especially Jarmila Kratochvílová, from the former Czechoslovakia, winning the women’s 400m/800m double) look insanely more impossible now than they did even then.

Still Helsinki also fast-forwarded athletics in the big-time professional era – and created a wealth of household names still familiar to this day: Carl Lewis, Sergei Bubka, Mary Decker, Grete Waitz, Rob de Castella, Calvin Smith, Edwin Moses, Daley Thompson, Greg Foster, and of course Cram and then Coghlan himself, who at age 30 still hadn’t found what he was looking for, despite his already star status among the world’s leading distance runners.

Now it all seems like another time and another place and that’s because it was. Only if Helsinki turned out to be a “who’s who” of the sport, for the 17th edition of the World Championships now underway in Doha some events are more likely to be a “who’s this?”

On RTÉ’s Game On during the week Marie Crowe asked me which athletes were likely to excite me the most in Doha, and there was no second thought. Without a Usain Bolt (for the first time since Osaka in 2007) there is no standout name or star but even without any natural bias or preference the men’s distance races may be about to offer something not seen since Helsinki 1983.

Mo Farah did win three successive 5,000m titles for Britain between 2011 and 2015 (narrowly losing to Edris in London two years ago) plus four 10,000m titles, only he was born in Somalia, and continued to do most of his training in the highlands of Kenya and Ethiopia.

The last non-African born athlete to claim any medal in the 5,000m was the Australian Craig Mottram, who won bronze back in 2005. While Europe has been losing face, the African dominance hasn’t gone unquestioned in another way, especially considering Kenya’s anti-doping record during and since the Rio Olympics.

Athletics team manager Michael Rotich has been banned for 10 years for providing advance notice to athletes of doping tests, and Asbel Kiprop, their three-time 1,500m World champion in 2011, 2013 and 2015, and in the mix for a medal for London in 2017 before fading on the last lap, was also done for doping offences last year. That list now goes on and on.

Manangoi is not in Doha to defend his 1,500m title, a late withdrawal due to injury, his younger brother George now leading the Kenyan challenge.

It’s opened up in other ways, because for the first time since Cram and Coghlan in 1983 there may be a European winner in those events in the form of Team Ingebrigtsen, also known as the Incredible Ingebrigtsens, the band of three Norwegian brothers who last night began their quest for glory over 5,000m, before two of them turn their attention back to the 1,500m.

It was the first time at a World Championships that all three brothers – 28-year-old Henrik, 26-year-old Filip, and Jakob, just turned 19 – were running the same event (Filip and Jakob are also doubling-up in the 1,500m), and there’s still good reason to believe one of them could head back to Norway with at least one gold medal.

Filip has already broken some of the African dominance in the 1,500m, winning bronze in London two years ago; Jakob has improved his best times this summer to 3:30.16 and 13:02.03 and, with the with biggest kick and confidence of all the brothers, he’s certainly capable of winning gold.

Only it looks like it won’t be in the 5,000m. After initially cruising through his heat last night, finishing in fourth and one of the first five automatic qualifiers, Jakob was later disqualified for taking three strides just inside the curb, while jostling for position with 600 metres remaining.

He gained no advantage but there was an objection lodged and under the (often ridiculously strict) rule the judges put the DQ next to his name, clearing the way for Britain’s Andy Butchart to enter Monday’s final, though he initially missed out.

Mixed zone So it briefly appeared it was over to Filip to Henrik to save some face for Europe in Monday’s final, but later Jakob was reinstated after a counter-appeal was upheld. Given what happened to their young brother they won’t lack extra incentive.

Back in March, at the European Indoor Championships in Glasgow, by the Sunday night the three brothers had won a complete set of medals for Norway – gold for Jakob in the 3,000m, then silver in the 1,500m, plus bronze for older brother Henrik also in the 3,000m. Filip might well have added another medal in the 1,500m, only to get himself disqualified for a similar breach of the (often ridiculously strict) rule.

That Jacob was once again the Kingebrigtsen in Glasgow was no surprise. We’d already run out of words to describe the youngest of the three brothers when, at just 17, he won a European outdoor double over 1,500m/5,000m in Berlin last August –a feat no other man, woman or boy could manage in the 84-year history of European Championship distance running.

Who is the World 1,500m champion? Despite some drama in Doha on the opening night that name might still roll off the tongue without a second thought.