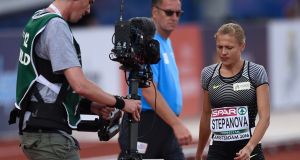 Yuliya Stepanova helped lift the lid on the extent of the doping problem within Russian sport. Photograph: Getty Images

Two books more or less about running arrived in the post last week, one I didn’t expect and wanted to read, the other like a blast from the past and I needed to read.

The first also felt like a privilege, as it was a preview copy of The Running Book, by John Connell, author of the bestselling The Cow Book, from 2017.

I knew The Running Book would be right up my alley, a myriad of reflections on running just for the pure simple joy that it brings, and something that so many people have discovered and re-discovered in recent times due to Covid-19 restrictions.

But The Running Book (in bookshops from October) would have to wait a while, as I delved straight into The Russian Affair, written by David Walsh, an insight into the life of a Russian couple and whistleblowers Vitaly and Yuliya Stepanov who lifted the lid on the systematic doping and cover-up by the Russia Anti-Doping Agency (RUSADA).

RUSADA was not anywhere near what most athletes around the world would encounter when faced with a drug tester knocking on the door early in the morning waiting to collect a sample.

The time period covered is from the late 2000s through to 2015 and the eventual banning of Russia from international sport. The drug testing facility was in place but those operating it were just using the system in a way to colour the true picture of what was going on in areas of Russian athletics, as monitored and reported by Vitaly and Yuliya.

In a strange twist of fate for Russian athletes, Vitaly, a club level athlete working for RUSADA, had a conscience and a duty of care and responsibility in his job to help ensure clean and fair sport. A romantic relationship developed with Yuliya, an 800 metres runner with a desire and passion to be on the Russian athletics team, her eyes set on the European and World Championships, even the Beijing Olympics in 2008.

The workings around Russian athletics were so corrupt that the only way to have any chance to even get on the team was to be a part of a doping system, which was organised through national coaches, and their contacts in the federation to protect them.

Part of problem with drugs in athletics back in 1990s is that there was plenty of speculation but not much concrete evidence, or indeed anyone to start blowing the whistle. Which is a pity. I was close enough to know that some things have never been above board in athletics. And even though I raced many Russian athletes down through the years, often there was very little proof or evidence that they were doing anything wrong, so for me it was easier just to get on with things, focus on what I had to do to be the best, and not worry about what others were doing.

When I look back and think of some of the athletes that I raced, I do remember when I was beaten more than when I won, and who finished behind me. At the 1992 Olympics in Barcelona, the 3,000m was won by Yelena Romanova, with Tetyana Dorovskikh second.

At that time these Russian athletes ran as part of the Unified team, when the Soviet Union was in the process of breaking up into independent States. A different colour uniform, maybe, but the same old names always present on the podium, not always consistent across all events, but always results delivered at the major championships.

I sat in the drug testing room that night after finishing in fourth position, surprising myself in some ways to get so close to a medal. All I wanted to do was run back to the Athlete’s Village, but I had to wait and provide a urine sample for testing just like those who finished in front of me.

The following year, 1993, Lyubov Kremlyova won the Grand Prix final mile in London, and I finished second, beaten by half a second, after winning the 3,000m the night before. In February of 1995, Kremlyova tested positive for steroids, yet was still allowed to run at the World Indoor Championships, also in Barcelona, standing on the podium for a bronze medal and taking the stage from local athlete Maite Zuniga from Spain, who was most likely later sent a bronze medal in the post. After a three-year ban Kremlyova was back on the Russian team for the Goodwill Games, and back on the podium for another bronze medal, no conscience on display here.

These are just a couple that I remember, in part because I didn’t focus on what I could not change, and in part felt I could still compete and beat most of the Russian runners. Sometimes even in their own backyard, at a track meet in Moscow, over 1,500m in 1995: that was one of the most oppressive places and lethargic feeling events I have ever run, similar to the Goodwill Games in St Petersburg in 1994. Between the heat and humidity, the dust and rationed food, it was not really a place that was conducive to high performance, yet some of the best athletes in the world came from Russia.

Russia is just one example of where there is now concrete evidence, in an easily readable format for all to see, and how the wool was truly pulled over the eyes of innocent athletes for decades. It does make you think as well if there was such a faulty system of drug control at the start of the millennium, what was going on before to maintain any form of control of what athletes were using to boost their training?

Vitaly is just one example of a good person in one country, trying to do the job he thought he was employed to do. Yet he was compromised and even when he tried to report it to the World Anti-Doping Agency (Wada) he rarely if ever got a reply or even an acknowledgement of a problem he was trying to bring to a higher level to get some help.

It was an encounter with investigative journalist Hajo Seppelt, in 2014, which brought things to public knowledge. It took the help of an independent mind to dig deep and unravel a trail of secrets, but it also takes time and patience to tell a story that is relatable, about normal people, who realised that the truth is far greater than lies.

Just as The Russian Affair is in some ways related to my past life as an athlete, I could resonate more with the thoughts and ramblings of the daily run explored as in The Running Book. These days I am often more aware of my thoughts and surroundings while running, than how fast and how far I am going. That sort of affair with running is long in the past.