Corkery stays the distance with a Bull’s notion 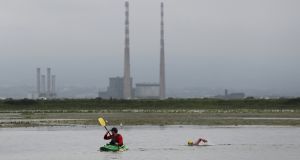 Patrick Corkery during his 12.5km circuit of the Bull Island with his kayak escort. Photograph: Nick Bradshaw/The Irish Times 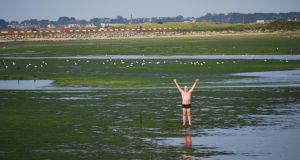 In the Forty Foot at Dublin’s Sandycove they put up signs when the Lion’s Mane jellyfish float into view. Swimmers look down in horror from the rocks at the brown coloured stripes and the heavy mass of orange or tan stinging tentacles beneath.

They vary in size with the bigger ones having a diameter of over two metres. In the chill waters of the northern hemisphere, Lion’s Mane thrive.

So it was in September 2014 Patrick Corkery, a well-known distance swimmer, left in the middle of his holiday in Spain when he was offered the chance to swim the North Channel, the stretch of water between Northern Ireland and Scotland.

It was about an hour into the swim when he felt the first nematocyst, the stinging cells of the Lion’s Mane, explode into his nose. He then felt another on his face. Over the course of the next few hours his arm, his body, his legs were all stung. But he stuck it out thinking of a return to Spain’s 31 degree heat as he splashed through the 14 degree water and the jellyfish.

Unknown to Corkery his body was suffering more than he imagined. He convinced himself to keep going but 10 hours later began to struggle with breathing. He started to cough. He laboured to pull his arms though the water and soon after a disquieting sensation of drowning began to gently overwhelm him and he became uncomfortable.

He couldn’t keep his head in the water, couldn’t turn over his arms and he noticed that the safety boat was drifting away. The support crew quickly recognised the severe warning signs and took action. Donal Buckley, another experienced swimmer jumped in, swam over and touched Buckley. Under the rules his swim was done.

“I’d been stung all day,” he says. “The sting is pain on the outside but you just don’t know what’s going on in the inside. The venom can be like a snake venom and can cause the blood to congeal. The doctors still don’t know because usually once you get stung by a jellyfish, you don’t hang around.

“I went to the doctor the next day because I was up most of the night. The only respite I could get was when I was sitting in a chair. I went back to Spain but hadn’t recovered and went to my own doctor when I came back. It was like two weeks before this I could swim 20 miles and now I couldn’t walk up the stairs.”

In January 2016, Corkery finally travelled to Royal Papworth Hospital in Cambridgeshire, one of the world’s leading cardiothoracic hospitals, for double open lung surgery (pulmonary endarterectomy). He had suffered from Pulmonary Hypertension after suffering massive pulmonary embolisms.

“They discovered blood clots the size of satsumas in my lungs,” he says. “They had to cut open the sternum and scrape out the clots.”

The surgery was a 10-hour operation and afterwards he spent two weeks in the hospital. In 2017, Corkery swam the English Channel, which he had set as a lifetime goal and last Sunday he believed he completed the first swim around The Bull Island in north Dublin, the home to a bird sanctuary and two golf courses, St Anne’s and Royal Dublin.

The 46-year-old swam clockwise from the channel through the mudflats on the north side of the causeway towards Sutton, past Howth Head and south along Dollymount Strand. He swam around the Star of the Sea statue at the end of the Bull Wall, then down and under the wooden bridge, up to the south side of the causeway finishing at St Anne’s Park in togs, under English Channel Rules.

“Getting in I just sank into the mud. But I found a spot about 500 yards down Foxes Lane. I got in there and swam back south to the causeway. When the tide is out there are mudflats and at the start we were looking at water deep enough to swim.”

In places the water was eight to 12 inches deep and as he grabbed the bottom, the sharp sea shells which lined the sea bed threatened to rip his fingers. In a swim like this of 12.5K he allowed for a 3k per hour pace.

Inside the island he worked against the current swimming north towards Sutton. Coming down the island the current was then with him and turning up Bull Wall he was into an outgoing tide before swimming under the wooden bridge into the current again.

“Several times along the coast I had a number of seals nudge my toes and feet, which is quite disconcerting at first,” he says. “After a while, they take to rubbing their whiskers on my feet too. I had heard before about this happening to swimmers, but it was new to me.

“I guess I was lucky with this encounter as seals have been known to take a bite of a toe or two. I was also lucky with jellyfish as I didn’t see any the whole way around and there had been a few Lion’s Mane spotted recently. I had a very nasty sting earlier in the summer and given my previous experience with them in the North Channel . . .”

The swim, to raise awareness for the Pulmonary Hypertension Association of Ireland, took four hours and 22 minutes and was co-incidentally bang on 200 years after Ballast Board engineer, George Halpin began building the Bull Wall in 1820.