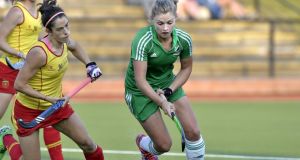 Ireland’s Chloe Watkins during a friendly against Spain in 2016. Photograph: Rowland White/Inpho

Graham Shaw has selected another youthful squad for Ireland’s trip to Spain this November, with six of the under-21 panel called up for last month’s games against Scotland retained for the three-nation series against the Spanish and Belgium.

Goalkeeper Emma Buckley (Cork Harlequins), Ellen Curran (Monkstown), Erin Getty (Randalstown), Jessica McMaster (Queens) and Loreto pair Hannah McLoughlin and Sarah Torrans are all included again as Shaw tests out his options in the build-up to next summer’s World Cup. Teenagers McLoughlin and Torrans in particular both impressing on their senior debuts against the Scots.

Three of the squad’s more experienced European-based players, Bloemendaal’s Anna O’Flanagan and Chloe Watkins and Hamburg’s Nikki Evans, return for the four games, two each against Spain and Belgium, as does Railway Union goalkeeper Grace O’Flanagan, but Katie Mullan, Gillian Pinder and Roisin Upton are all rested.

In all 15 of the squad – fitness permitting – will be in Hockey League action this weekend.

Second placed Cork Harlequins are on their travels yet again when they take on Pembroke Wanderers in Saturday’s only game.