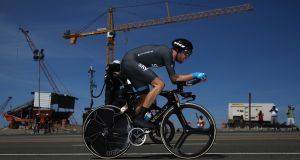 Bradley Wiggins has claimed that he could not remember what was in the package. Photograph: Getty Images

UK Anti-Doping has announced there are no anti-doping charges as a result of an investigation into the contents of a jiffy bag delivered to Bradley Wiggins at the 2011 Criterium du Dauphine.

The anti-doping agency said that it could not find sufficient evidence to definitively determine what was in the package. British Cycling claimed at a parliamentary select committee earlier this year that it contained Fluimucil and not, as had been alleged, the banned corticosteroid Triamcinalone.

Wiggins has claimed that he could not remember what was in the package. Dr Richard Freeman, the British Cycling doctor who ordered the package, was unable to give evidence to the inquiry, citing ill health. The Guardian revealed this month that Freeman had resigned.

“I can confirm that Ukad does not intend to issue any anti-doping charges as a result of the investigation into the package,” said Ukad chief executive Nicole Sapstead, who began looking into the affair last year following revelations in the Daily Mail.

“As with all Ukad investigations, our work has been thorough and extensive, and I can reassure the public that we treat every credible allegation with the utmost seriousness.”

However, Ukad said that it would hand information to the General Medical Council, which could result in it taking on the investigation.

“Our investigation was hampered by a lack of accurate medical records being available at British Cycling. This is a serious concern. As part of their conditions to receive public funding from UK Sport and other Home Country Sports Councils, all sports governing bodies must comply with the UK National Anti-Doping Policy. In this case the matter was further complicated by the crossover between personnel at British Cycling and Team Sky,” said Sapstead.

“We have written to British Cycling and a copy of this letter has also been sent to UK Sport and Sport England. We have also separately written to Team Sky. Finally, we have referred some information to the GMC, and will cooperate with the GMC as necessary in respect of that information.”

British Cycling chief executive officer Julie Harrington said: “I would like to thank Nicole Sapstead and her team at Ukad for the diligence and determination they have shown in investigating this matter. Their work on this, and throughout sport, is essential if we are to earn and retain the trust of athletes and fans.”

A statement from Team Sky said: “UK Anti-Doping has today confirmed that it does not intend to bring forward any anti-doping charges in relation to its investigation into issues around the 2011 Criterium du Dauphine. This investigation has now been brought to a close.

“We are pleased that UK Anti-Doping have concluded their investigation and that they will not be taking any further action. We have always maintained that there was no wrongdoing and we have co-operated fully with UK Anti-Doping over the last year.

“Since our inception as a new pro cycling team in 2010 we have continually strengthened our systems and processes so they best support our strong commitment to anti-doping.