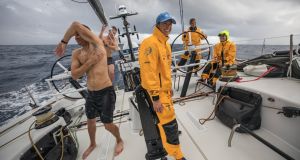 Crew members of Turn the Tide on Plastics take advantage of the rain to have a shower on deck during the second leg of the Volvo Ocean Race from Lisbon to Cape Town. Photograph: Sam Greenfield/Volvo Ocean Race

So it turns out my crossing the equator ritual came down to a choice between my hair or biting the head off a flying fish that are everywhere out here.

As a first-timer, I was expecting a visit from King Neptune to pay my dues for disrespecting his domain with my unworthy presence and now that it’s over, I can breathe a sigh of relief.

I still have my hair, I’ve avoided the reverse mohawks that my crewmates Lucas and Henry now sport and my eyebrows are unshaved.

However, biting the head off a small dead fish means seafood won’t be top of my real food priority list when we arrive in South Africa sometime in the next two weeks.

There is a chance that we got off a little bit easier than other boats as Neptune (our skipper Dee Caffari) was under pressure from us to explain the extent of her own first-timer ritual considering she crossed the equator single-handed on two separate circumnavigations.

Thankfully we all agreed that storing-up rotting freeze-dried slops to be smeared over the candidates would be skipped as the inside of the boat would be in a terrible state, especially in the heat of the tropics.

I spent an entire watch bailing and sponging out the bilge (sub-floor) of water the other day and I can only imagine how nasty that might be with old, smelly food mixed in.

Anyway, it was a fun sideshow from the non-stop intensity of this second leg of the Volvo Ocean Race from Lisbon to Cape Town.

Luckily for me, I was on watch and on the helm when we crossed and it’s pretty cool to be able to ‘sail over the equator’ and watch the GPS co-ordinates change from Northern to Southern hemisphere.

Steering the boat isn’t as physical as being on the grinders (used for turning the winches) or shifting the stacks of sails and equipment. But it is just as tiring as a four-hour watch, the total focus of keeping the boat moving at its best speed is mentally draining.

But the last week has seen our performance improve and we managed to lift ourselves off the bottom rung of the standings by over-taking the Hong Kong entry Scallyway.

Ourselves on Turn the Tide on Plastics and Scallywag are within sight of one another as we trail the leaders by around 60 miles which in ocean racing terms and the scale of a 6,500 nautical-mile leg is pretty incredible.

Both boats are the relative rookies of the race, latecomers to the field, so playing a game of catch-up in terms of learning how these boats work and go faster. Changing sail combinations and learning how they work together is a non-stop process and having the other boat close by is useful too. And even if they drop out of sight, we can still see them on AIS (Automatic Identification System) up to around 12 miles away which gives us their course and speed so we can measure their performance.

Which means they can measure ours too so we’re all learning.

The last week also saw our transit of the notorious Doldrums region on the northern side of the Equator.

From sea-faring lore, I was expecting us to be becalmed for perhaps days on end. But on this occasion we crossed quickly and the wind didn’t fall much less than five or six knots. There were plenty of thunderstorms and the fresh-water downpours brought great joy as we could shower by standing underneath the mainsail as all the rainwater run-off was as good as any power-shower.

Unfortunately, almost all my fresh clothes are salt-water saturated and I’m down to my last thermal leggings, which I was hoping not to be down to yet.

While we have tropical conditions for another few days as we head closer towards the coast of Brazil on our way southwards, the South Atlantic high-pressure systems, the St Helena High, is effectively blocking the most direct route to Cape Town with lighter headwinds which isn’t fast.

That means we’ll be sailing directly down into the Southern Ocean where it’ll be really cold and wet once again.

It’ll be a shock to the system, getting blasted by cold water again but I’m still really enjoying this; it’s still an awesome feeling and it’s so much more than I expected it to be.

But with another two weeks of sailing, our aim is to close the gap on the leaders and hopefully put us in a position to challenge them closer to the leg finish.

Only another 3,000 nautical miles to go!