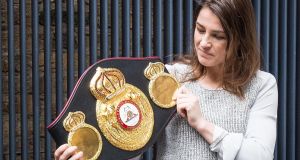 It is the fight Katie Taylor had been looking for and the one 33-year-old American Jessica McCaskill had called for.

If Taylor ever allowed grudge to get in the way of her boxing this would be the match as the two lightweight’s have been confirmed to meet on December 13th in York Hall at London’s Bethnal Green.

The bout will be live on Skysports and it will be the first time a female has headlined a boxing bill for the network.

“If she’s as relentless in the ring as she is on social media it should be a great fight!” said Taylor. “I’m more than happy to give her the opportunity and I certainly won’t be avoiding anyone as a champion.

“I truly believe that this is only the start of things for me. I want all the belts and the biggest possible fights over the next few years.

“It’s been a great first year for me as a professional and this really sets me up for a great finish to it. Headlining on Sky Sports is another first for the sport and I’m so grateful to Eddie Hearn and Sky for the opportunity.

“Trash talking’s not really my thing but she seems to be happy to talk enough for the both of us anyway. Maybe it’s something she feels she has to do for her own confidence but none of that stuff matters once the first bell rings.

“I’m happy to let my boxing do the talking then and that’s definitely where I express myself best.”

In the first defence of her WBO lightweight title Taylor meets the woman who has accused her of disrespecting women’s boxing, a charge Taylor denies.

“I felt like Katie disrespected women’s boxing by telling all these ladies they have to step up,” said Mc Caskill in July. “She’s supposed to be here to help women’s boxing, and I don’t feel like she is.”

Taylor’s frustration overflowed as she sought fights but with no opponents stepping forward she made the comment that other fighters were avoiding her.

Her words also followed accusations that her bouts were one sided. They were but it had little to do with her desire to meet the top players in the division.

McCaskill (5-1 3 TKOs) is the American number one and will mark a step up in Taylor’s plans to climb towards dominating the division.

The American last fought in July in Chicago against Natalie Browne, where she won by TKO, while Taylor brought her professional record to 7-0 when she stopped Argentina’s Anahi Esther Sanchez last month on the undercard of Anthony Joshua’s successful heavyweight defence in Cardiff’s Principality Stadium.

McCaskill has never fought professionally outside the USA and three of her wins came against boxers making their professional debut.

“I have a lot of respect for this sport and for Katie Taylor, but I will be bringing that belt and respect back with me,” said McCaskill.

“I want to be known as the number one in America and of course the World title is definitely the goal.”

McCaskill, who works in the city in Chicago and calls boxing her second job, like Taylor made her own history in July when Warriors Boxing Promotions held special edition of their “Windy City Fight Night” professional boxing series. For the first time in Illinois boxing history, a female boxer, McCaskill, headlined the bill.

The defence for Taylor takes place just seven weeks after picking up her first professional belt.