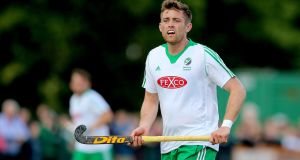 Shane O’Donoghue: On Sunday his rocket in the 53rd minute completed the result on a day when both goalkeepers shone with multiple saves. Photograph: James Crombie/Inpho

Glenanne strengthened their place at the top of the men’s EY Hockey League table as they ground out a 2-0 win over basement side Railway Union with a pair of penalty corner goals in the third quarter.

It was far from a comfortable afternoon, though, at Park Avenue but Railway’s lack of cutting edge meant once they fell behind to Stephen Brownlow’s deflected shot, it was always going to be a mountain to climb.

Shane O’Donoghue’s rocket in the 53rd minute completed the result on a day when both goalkeepers – Stephen O’Keeffe for Railway, Iain Walker for Glenanne – shone with multiple saves.

For Glenanne, it bolstered their lead at the top of the table with Lisnagarvey succumbing to a late Cookstown sucker-punch to draw 2-2. It means the Tallaght club – which moved to Booterstown this term – have a three-point advantage, albeit with a game extra played, something few would have predicted in preseason.

The addition of former international Walker between the posts has proven critical among a number of other summer arrivals to bolster what was a dangerous but, ultimately thin squad last term.

For Railway, they drew their fifth blank in six games on Sunday when they lost 2-0 to Cork C of I and are now four points away from safety without a point to their name.

Three Rock Rovers, Pembroke and Monkstown strengthened their places in the top five with healthy wins on Saturday.

Rovers came from a goal down to defeat Banbridge 4-1. The key moment came when Jamie Carr, 10 minutes into his first appearance of the season, came off the bench to save a penalty stroke from Philip Brown.

That would have put Bann level at 2-2. Instead, Rovers scored twice in the aftermath via Ross Canning and Ben Walker to pull away.

Monkstown came from 2-0 down to beat Cork C of I 3-2 with Guy Sarratt the inspiration with two goals. Alan Sothern added another two to his tally for the season in Pembroke’s 3-0 win at Annadale.

1 Owen Doyle: Creeping professionalism of schools rugby a threat to the game
2 Coco Gauff pulls off biggest shock yet by beating Naomi Osaka
3 GAA officials and referees brace themselves as new rules kick in, and this time it's for real
4 Scotland’s Finn Russell missed training after Sunday drinking session
5 Rugby under threat; Niall Quinn steps into FAI breach
Real news has value SUBSCRIBE