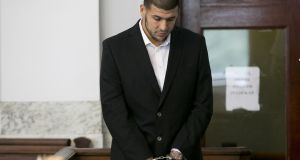 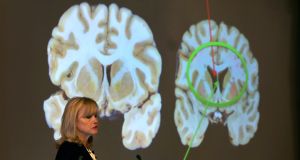 Dr. Ann McKee announces her findings on her examination of the brain of Hernandez. Photo: John Tlumacki/The Boston Globe via Getty Images 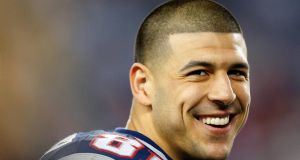 Such is the dysfunctional state of the sport just now that one of the most seismic moments in recent NFL history occurred in a lecture hall at Boston University last Thursday. There, Dr Ann McKee revealed that the former New England Patriots’ tight end and convicted murderer Aaron Hernandez had one of the worst cases of Chronic Traumatic Encephalopathy (CTE) she had ever seen in somebody so young.

On the slides she used in her presentation the evidence was so glaring and graphic that a room full of doctors and scientists, men and women who spend their lives forensically examining damaged brains, gasped aloud.

Hernandez, 27, was found hanging in his cell at Souza-Baranowski prison in Lancaster, Massachusetts last April, two years into a sentence of life without the possibility of parole for the murder of his friend Odin Lloyd in 2013. He had just been acquitted of another double homicide charge days before his apparent suicide.

Even by the too-often soap operatic standards of American sports, this fall was as precipitous as it was bloody, the circumstances of his troubled life as much as his grisly death prompting his family to donate his brain to McKee, Professor of Pathology and Neurology at Boston’s CTE Centre.

A preternatual ability to catch a ball on the field had earned Hernandez a five year $40m contract with the Patriots before the age of 25. Unfortunately, this talent was accompanied by a violent obsession with remaining one of the boys in the hood despite his burgeoning fame and fortune. The peculiar nature of this double life, matinee idol athlete on television every Sunday afternoon, gun-toting wannabe gang-banger once darkness fell, may now be regarded in a very different light following McKee’s findings.

“We can’t take the pathology and explain the behaviour,” said McKee. “But we can say collectively that individuals with CTE of this severity have difficulty with impulse control, decision-making, aggression, often emotional volatility, and rage behaviour. Especially in the frontal lobes, which are very important for decision-making, judgment, and cognition, we could see damage to the inner chambers of the brain. This would be the first case we’ve ever seen of that kind of damage in such a young individual.”

Against that background, the initial tabloid narrative about an out of control character whose head was turned by a toxic brew of celebrity, money and fast living may demand a more nuanced explanation. Hernandez’ notoriety, and his estate’s pending legal action against the NFL, its helmet manufacturers and the Patriots, also make this a landmark moment in the evolution of a sport which has disgraced itself in its handling of concussion, head trauma and brain disease.

Beyond the obvious impact on the pro game, there are implications here too that reach all the way down to grassroots level.

Hernandez started his last competitive match for the Patriots at the age of 23 yet his brain was like nothing the specialists had seen in anybody under the age of 46. And to date, McKee and her team have examined nearly 500 brains of former NFL stars. Hardly a long-serving veteran then but somebody who had put in just three full seasons before his extra-curricular interests prematurely derailed his career.

Given that he only played 38 games in the league, it seems fair to assume a significant proportion of the concussive hits to his head were shipped en route to the show, rather than when he got there.

Like most who make it all the way, Hernandez tracked a familiar trajectory through the foothills of the sport. At five years old, he started playing flag football on the Pop Warner field in Bristol, Connecticut, graduating soon after to donning helmet and pads for the full contact version of the sport. As a teenager at the town high school, where his father and brother had been gridiron legends before him, he broke state records as a pass receiver and won a prized scholarship to the University of Florida.

Had the deterioration in his brain already begun by then? Was the worst damage inflicted before he even reached his teens? What part did his own genetics play? How many blows did he take as a collegiate star and do they explain why his life started to veer off the rails during those years in Florida? These are the difficult questions that must, somehow, be answered now. These are the issues forcing many across America to wonder anew about the morality of allowing kids of any age to play a game where brain-rattling collisions happen on nearly every down.

In the six years that have passed since the one-time Chicago Bear Dave Duerson shot himself in the chest and asked that his brain be studied, the CTE epidemic among former NFL greats has caused the number of children playing the game to drop, spectacularly so in some parts of the country. The chorus of voices questioning under what circumstances grid-iron, as currently constituted, can even be justified anymore grows louder and louder too.

“The more information comes out, the worse it looks,” said Bob Costas, long-time face of the NFL on NBC the other week. “I certainly would not let, if I had an athletically gifted 12- or 13-year-old son, I would not let him play football. The reality is that this game destroys people’s brains.”

And, in the case of Aaron Hernandez, far too many lives.