Serena Williams confirms she is expecting her first child 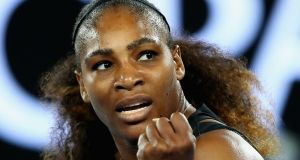 Serena Williams, the best women’s tennis player of this era and one of the world’s most prominent athletes, has confirmed that she is pregnant and expecting her first child later this year.

Williams, 35, has not played a match since winning her 23rd Grand Slam singles title at the Australian Open on January 28th, when she was already close to two months pregnant. More major titles will have to wait, if they happen at all. Williams will turn 36 in September, but her spokeswoman Kelly Bush Novak said that while Williams would miss the rest of the 2017 season, she intended to return to the circuit in 2018.

“Serena said that I should make sure if anyone asks that that is clear,” Bush Novak said. The announcement was the latest surprise from Williams, who unexpectedly announced her engagement to Alexis Ohanian, a businessman and the co-founder of Reddit, in December.

“I’m elated for her; I’ve seen her with our son, and she will be a great mother,” said Andy Roddick, a former men’s world number one who is a good friend of Williams and has known her since childhood.

Chris Evert, the former women’s number one, said she communicated with Williams via text. “Getting married and having a child is a special journey,” Evert said. “She, to me, is more than ready for this lifestyle change. It’s been 20 years on tour.”

Williams’s pregnancy was confirmed after a wild day of speculation that began when a photograph was posted on Williams’s Snapchat story, perhaps inadvertently, that showed her posing sideways in a yellow bathing suit with what looked like a baby bump. The image, which appeared to be taken in a mirror, was captioned “20 weeks” and was later deleted.

Bush Novak said she had no information about Williams’s social-media accounts or why the image had been removed. Williams is the second leading women’s player to announce a pregnancy in the past year. Victoria Azarenka, a former number one and a two-time Grand Slam titleist, left the circuit in June and gave birth to a son, Leo, in December. Azarenka, 27, is planning to return to competition in late July, after Wimbledon.

It has been an extraordinary, and extraordinarily unsettled, stretch in women’s tennis, with major stars missing extended action for both joyful and downbeat reasons.

Maria Sharapova will return to competition on Wednesday in Germany after a 15-month suspension for a doping violation. Petra Kvitova, a two-time Wimbledon champion, is still recovering from injuries she suffered in a knife attack at her home in the Czech Republic in December.

By winning in Australia, Williams broke her tie with Steffi Graf for the most Grand Slam singles titles in the Open era. Williams ranks behind only Margaret Court’s 24 on the career list. Court, an Australian, won the last three of those titles in 1973 after giving birth to a son, Danny, in 1972.

Others have returned to the circuit after motherhood and prospered, including Kim Clijsters, the Belgian star who won the US Open in 2009 and 2010 and the Australian Open in 2011 after the birth of her daughter, Jada, in 2008. Clijsters retired in 2012 at the age of 29. Court played in her last Grand Slam tournament at 33. But no leading singles player has returned from pregnancy at Williams’s age. Then again, she has spent a career defying convention, becoming a champion despite playing little competitive junior tennis and returning from long layoffs and major health issues to dominate.

Williams has won 10 of her 23 major singles titles since turning 30 and is by far the oldest women to hold the number one spot in the WTA rankings. “I think if Serena wants to come back after having a baby, I think she’s proven at this point that age is not a big factor for her,” said Pam Shriver, an analyst and a former leading player.

“She may even feel she can take a little lesson from Roger Federer. I know it’s for different reasons, but look how he’s come back at age 35. I don’t think it really matters if you’re 35 or 37 or 38. You’re part of that same age group, and once you’ve gotten over that mental hump of competing at this higher level in your thirties, which she obviously has, it is certainly possible.”

Williams did not lose a set as she swept to her seventh singles title at the Australian Open, defeating her older sister Venus Williams in the final. It is unclear whether Serena Williams knew she was pregnant during that tournament. “It does make what she did in Melbourne even more spectacular,” Shriver said. “But having been pregnant a couple times, including with twins, if you’re going to win a major when pregnant, guess what the right time to do it is? The first two months.”

Williams has not played a tournament since that victory. She missed events in Indian Wells, California, and Miami in March, citing knee problems. She has played little outside the Grand Slam tournaments in the past 12 months – at the Italian Open in Rome and the Olympics in Rio de Janeiro last season and at the tournament in Auckland, New Zealand, in early January.

But the points she has accumulated in the four major events – she is the reigning champion at the Australian Open and Wimbledon and was a finalist at last year’s French Open – have allowed her to remain in the top two in the rankings. With the current number one, Angelique Kerber, struggling to match her results from 2016, Williams will return to the top spot on Monday. – New York Times Service