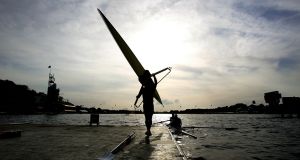 The Get Going Get Rowing programme, which brings schoolgirls into rowing, has introduced about 8,000 individuals to the sport already this year. Photo: Christopher Lee/Getty Images

If you could wind time back a decade, you would find rowing supporters asking what was a familiar question: why are there so few Irish schools which row?

Now bounce back to the present.

Seventy schools from all four provinces will be represented at the Irish Schools’ Regatta at O’Brien’s Bridge in Clare on Sunday. The total number of crews entered is 494 (a record) and the programme runs from 8am to 6pm.

In some ways the statistics are misleading. There remain about 12 educational institutions which can be classified as rowing schools, with just a few – Blackrock College is a notable one – which now offer the sport in a serious way when before they did not.

The two-day festival of rowing this weekend builds on the fact that Limerick Regatta on the Saturday at O’Brien’s Bridge offers keen competition for club rowers and many of the young people involved will don their club colours on the Sunday.

However, rowing is reaching into schools in a new and exciting way.

The Get Going Get Rowing programme, which brings schoolgirls into rowing, has taken in about 8,000 individuals already this year, from Limerick, Galway, Skibbereen, Carlow and the greater Dublin area.

Typically the programme starts girls on ergometers (rowing machines) and lasts four to six weeks, with one of those on the water. Michelle Carpenter, who was the single proponent as recently as February 2014, now heads up a big team of coaches. She thinks the scheme could boost university rowing in the next few years.

On the evidence of the entry for Limerick Regatta – and the heads and regattas held so far this year – adult rowing is also thriving. The entry of over 400 crews includes 20 intermediate single scullers and seven club eights. In the entry for the senior single scull, Daire Lynch is the standout name.

The pillar-to-post win for the UCD men’s senior eight over the hosts was the most memorable part of Trinity Regatta last weekend. The very slick crew will now lose David O’Malley and Shane Mulvaney to the Ireland high performance system – they will be an under-23 lightweight pair to watch this season.

Shane O’Connell, who did not row on Saturday, should also represent his country. UCD coach Martin Feeley expects to have a good eight in action at Metropolitan Regatta on May 27th.

Atlantic rower Gavan Hennigan reports that he has suffered a stress fracture of his back. This throws into doubt the planned row across the Atlantic from New York to Ireland which he hoped to do this summer.