Aaron Hernandez’s brain to be released for CTE tests 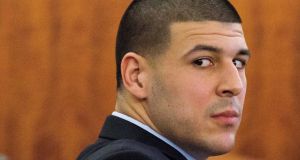 A Massachusetts prosecutor said on Thursday the state would release the brain of New England Patriots player Aaron Hernandez after his attorney accused the state of reneging on a deal to do so the day after he was found dead in his prison cell.

The 27-year-old former National Football League player hung himself early on Wednesday in the cell where he was serving a life sentence for the 2013 murder of an acquaintance, dying less than a week after he was cleared of a separate double-murder charge, according to state officials.

The District Attorney investigating the death said Hernandez’s brain would be released to his family now that an investigation of the body by the Office of the Chief Medical Examiner had been completed.

Hernandez’s family wanted his brain turned over to Boston University’s CTE centre, his attorney Jose Baez said. The centre studies chronic traumatic encephalopathy, a condition linked to the sort of repeated head hits common in football that can lead to aggression and dementia later in life.

Baez, who successfully defended Hernandez in his most recent trial, on Thursday said the medical examiner’s office had turned over Hernandez’s remains to his family but retained his brain. He said officials at the office had told him they wanted to study the brain themselves.

“The family should be able to have the dignity of a proper service in the proper possession of Aaron’s remains,” Baez told reporters after exiting the medical examiner’s office.

Hernandez had a $41 million contract with the New England Patriots when he was arrested at his home in June 2013 and charged with the fatal shooting. Prosecution witnesses at his two trials painted a picture of a troubled man with a history of drug use and paranoid tendencies.

The District Attorney for Worcester County, the site of the Souza-Baranowski Correctional Center where Hernandez died, on Thursday ruled his death a suicide, with the official cause of death asphyxia by hanging.

“There were no signs of a struggle, and investigators determined that Mr Hernandez was alone at the time of the hanging,” District Attorney Joseph Early Jr said in a statement.

Hernandez had been locked in his cell at 8pm, seven hours before his body was found, and three hand-written notes were found near a Bible in his cell, Early added. He did not disclose the content of the notes.