EY Hockey League goes down to the wire 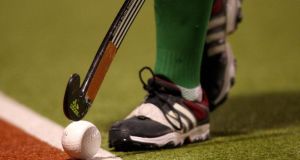 All to play for in the men’s hockey Champions Trophy on the final weekend of the season. Photograph: Ryan Byrne/INPHO

It is just as the organisers would have wanted, with two teams sharing equal points going into the last league match. The EY Hockey League goes down to the final weekend with Banbridge and Three Rock Rovers sharing the top position on 42 points.

Currently Banbridge, Rovers, Lisnagarvey and Monkstown fill the top four slots and if that does not change, and it looks pretty certain that it won’t, those teams will go into the final weekend of the season to decide the Champions Trophy.

Even if Monkstown lose in their final match away to ’Garvey in Comber Road, their goal difference is much superior to fifth placed Cork Church of Ireland and the Dublin team will hold that fourth league spot.

The goal difference currently stands at 23 for Monkstown and six for C of I so unless there is a swing of 17 or 18 goals between the two teams, the top four teams as they now stand on the table will compete for the Champions Trophy next weekend in Grange Road.

At the other end of the table there is also drama. The team finishing 10th, which is Instonians and that will not change, will be relegated to their home province, Ulster, for the following season.

The team finishing ninth, which is currently UCD, will enter a playoff with the runner-up in the provincial playoffs to determine which club will play in the national league in the following season.

However, that could change this weekend. With just one point separating UCD and Railway Union, a win for the students over Pembroke, combined with Railway taking nothing from Banbridge in Havelock Park, could reverse those positions and send Railway into the playoff for survival.