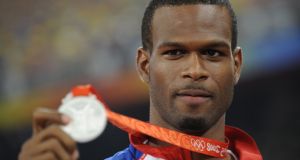 Germaine Mason, who won silver for Britain at the 2008 Games in Beijing, has died in a motorbike crash in Jamaica. Photograph: Fabrice Coffrini / AFP

Germaine Mason, the British athlete who won a high jump silver medal at the 2008 Olympics, has died in a motorcycle accident in Jamaica.

The 34-year-old was riding at the front of a convoy with a number of athletes, including Usain Bolt and the 2005 world championship 100m silver medallist Michael Frater, as well as the former Bolton defender Ricardo Gardner, when he lost control of his bike on the Palisadoes main road in Kingston.

Unconfirmed reports suggest he was trying to avoid a vehicle that had lost control on the other side of the road. He was pronounced dead at the scene.

Mason was born in Jamaica and trained with the Stephen Francis-coached MVP Track Club before switching allegiance to Great Britain in 2006. Two years later he won a silver medal for Great Britain in Beijing after jumping 2.34m – a height that equalled his personal best – to finish behind the Russian Andrey Silnov, who cleared 2.36m.

Mason qualified for Britain by virtue of a British father who, confusingly, lived in Jamaica while his Jamaican mother lived in west London. He held a British passport all his life but decided to switch allegiances after being struck by a serious knee ligament injury in 2004. He made his GB debut in the 2006 European Cup.