Former world champion believes obsession has held back his career 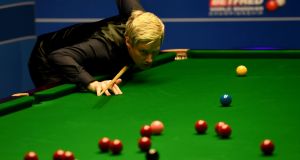 Neil Robertson lines up a shot against Noppon Saengkham during their first round match of the World Snooker Championship at the Crucible Theatre in Sheffield. Photograph: Gareth Copley/Getty Images

Neil Robertson has admitted he was losing his life and snooker career to video games. The 2010 world champion has pulled the plug on his console addiction to focus on landing a second Crucible title.

He took a first step towards that goal by beating Thailand’s Crucible newcomer Noppon Saengkham 10-4 in the first round in Sheffield.

Then Robertson opened up about the obsession with gaming that he believes has held him back on the snooker table.

“I’ve decided to make a clean break from them,” the 35-year-old Australian said.

“Once I turn the computer on I can easily play them for 12 hours straight.

“I’m very happy to be painting more Warhammer figures and I’ll leave it at that. I’ve got lucky.

“It is a serious issue. In China there’s a gaming addiction camp where they actually take their kids. They’re just too hooked on them and they take them away for three weeks, no video games, and they’re probably crawling up the walls.”

Robertson even suggested taking up golf could be seriously damaging for his relationship with partner Mille and son Alexander.

“I’ve got quite an addictive personality where if I start doing something I try to do it to the best of my ability. That’s why I dare not pick up a golf club because Mille and Alexander probably wouldn’t see me,” Robertson said.

Also a former Masters and UK champion, Robertson’s form has taken a significant dip this season, and the former world number one is down at number nine in the rankings currently.

He lives in Cambridge, where he set up home in 2004 after leaving Melbourne to pursue his snooker dream.

But if Robertson had not been so engaged with the gaming culture as a teenager, he believes his career would have taken off sooner.

Robertson said: “Even when I was a teenager it probably stopped me coming to England and getting on the tour a couple of years earlier than I did.

“I was heavily addicted to a game called Diablo II. It got to the point back home in Australia that my mum would have to create an account and log on to see if I was on it instead of playing snooker.

In a separate Eurosport interview, Robertson said he used to stay up all night playing games.

“Then all of a sudden, it is 6am, the birds are tweeting and I’m thinking: ‘Oh my God, I’ve got to get up in a couple of hours to take my son Alexander to school. Then I’ve got to practice’,” he said.

“If you are a single guy, and work in a normal job, you can get around it. But you can’t win professional snooker matches when you are tired.”

1 Tianna Bartoletta: ‘After you’ve gotten your medal, you become black in America again’
2 Timo Werner giving up on Liverpool dream on path to being truly wanted
3 Mature Ringrose keeping the ups and downs of rugby life in perspective
4 Betting shops face uncertain future as they prepare for Monday reopening
5 Sports bodies must keep electronic records of participants as training sessions resume
Real news has value SUBSCRIBE