Howth teenager to battle it out with Olympic medalist Murphy, Hopkins and Keller 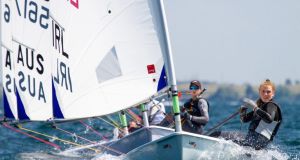 Fifteen-year-old World Under 17 Radial Champion Eve McMahon will contest next year’s Irish Olympic trials in a bid for the single Irish women’s Laser berth at Tokyo 2020.

Murphy revealed the depth of her ambition to ditch her still-born 49er campaign last month and return to the Laser dinghy with under 150 days to the first event.

It brings to four the Irish helmswomen declared for the trials series.

Campaigners Aoife Hopkins (21), also of Howth, and Aisling Keller (23) of Lough Derg were the only campaigners on the circuit until last September but now that figure has doubled.

Murphy and Hopkins crossed swords in 2015 in the run-up to Rio. Back then, Murphy dismissed the challenge of a then 17-year-old Hopkins for the Irish spot that ultimately produced the silver medal.

Hopkins is now back for another tilt along with Irish Radial champion Keller who secured the nation berth this summer at the World Championships in Japan. Significantly, both have been engaged in full-time campaigns and are now World Championship gold fleet finishers; and that’s a step up in standard that both Murphy and McMahon must confront.

The 2020 three-regatta trial begins next March. The combined scores from each of the following regattas will be used to decide the Irish nomination: Palma (March 28th-April 4th) Genoa World Cup round and final European Nation qualifier (April 13th-19th) and lastly Hyéres Regatta (April 25th-May 2nd, 2020).

Debutante McMahon intends to use the time to gain valuable experience at Olympic level while still a Transition Year student at the Institute of Education in Dublin.

At the other end of the scale, Murphy’s involvement, having been fourth in London and second in Rio is aimed solely at gold medal success in Tokyo.

McMahon had a stand-out season becoming Irish youth national Radial Champion at Royal Cork in May before going on to take the Under-17 World title in Kingston, Ontario in August, so she has already demonstrated she can compete with the best in the world in her age group.

Advancing to senior competition at 15 years-of-age is one thing but the pressure cooker atmosphere of an Olympic trial quite another, so next Spring’s experience should prove invaluable for her long-term career prospects on the international circuit.

And, in what will no doubt be billed as another first for Ireland’s Olympic panel, the 2020 trialists now feature siblings in separate classes; McMahon’s older brother is making waves in the men’s Laser class.

Ewan (20) has been impressive in his first senior season with performances in Japan this summer in the men’s world championships gold fleet.

He narrowed the gap on Rio representative Finn Lynch and, if he can repeat the performance in early 2020 in Genoa, then he is set to add extra spice to the Irish hunt for the last of the Olympic slots that have thus far evaded Lynch.