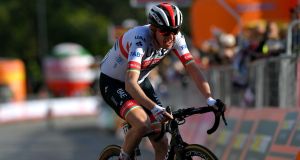 Daniel Martin’s fifth place was his highest placing since taking fifth on a stage of the Critérium du Dauphiné in June. Photograph: Getty Images

Dan Martin showed he is on course to challenge for the 2019 Il Lombardia Classic when he logged a strong showing in the final warm-up event on Thursday. Martin was one of the strongest in the finale of the Gran Piemonte race in Italy, pushing to the fore on the final climb up to the summit of Oropa.

Martin looked comfortable and made the split when Team Ineos forced the pace close to the finish. However as the speed further ramped up he became slightly detached, but rallied to chase the leading four riders all the way to the line. Tour de France winner Egan Bernal was first home, soloing in six seconds clear of team-mate Ivan Sosa and eight up on Nans Peters (Ag2r La Mondiale).

Emanuel Buchmann (Bora-Hansgrohe) was next, 10 seconds adrift, with Martin finishing just behind him.

“My legs were really good today but Bernal was so strong,” Martin said. “I crashed early on: my front wheel went from under me on one of the corners and I came down. It wasn’t ideal, but I’m okay.”

Martin’s fifth place was his highest placing since taking fifth on a stage of the Critérium du Dauphiné in June. He went into the Tour de France believing he was in potentially his best shape ever, but things didn’t work out and he finished 18th. In his Irish Times diary, he alluded to what he termed a fuelling issue during the race but didn’t elaborate. Media reports subsequently suggested that some riders were unhappy with the nutritional sponsor. The team denied there were any problems with their products.

Martin said recently that Il Lombardia was his prime end of season goal. He won the race in 2014 with a brilliantly-timed late attack and his 18th place in last Saturday’s Giro dell’Emilia showed his form was on the rise. He was also one of the best towards the end of Tuesday’s Tre Valli Varesine race, going clear in a dangerous breakaway with fellow Irishman Eddie Dunbar (Team Ineos).

However the group he was in went the wrong way on the course, losing their chance.

He was frustrated by that but his performance, his Giro dell’Emilia ride plus his fifth place in Thursday’s event suggest that he should be a solid challenger for Il Lombardia.

As ever, he shows no sign of nerves. “We are going into Lombardia relaxed,” he said, looking ahead to Saturday’s event. “[Team-mate Diego] Ulissi is going really well too so we have a strong team.”

Martin is due to leave his UAE Team Emirates squad at the end of the season. He will be one of the leaders of the Israel Cycling Academy team during the next two years. The squad is taking over the licence of the Katusha-Alpecin team and is consequently stepping up to the World Tour level. That will entitle it to ride the Tour de France plus all of cycling’s top events.