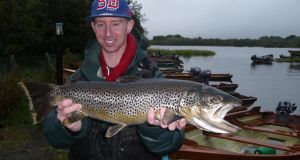 Dylan Ennis from Moate, Co Westmeath with his winning trout of 7.5lb at the Lough Sheelin Trout Protection Association competition

Lough Sheelin proved yet again worth its weight in gold at last weekend’s double-header fly-fishing competitions during which the lake gave up quality wild brown trout the likes of which you’d be hard-pressed to find in other lakes in Ireland, Europe and, indeed, the entire northern hemisphere.

The late and great Peter O’Reilly, in his book Loughs of Ireland, wrote: “The beauty of Sheelin lies in the size and quality of its trout, the many challenges it offers, the range of fly-fishing techniques and, above all, the great spirit of friendship among the anglers.” (I would vouch for that.)

Hosted by Lough Sheelin Trout Protection Association, Saturday’s event attracted a record attendance of 228 anglers (114 boats), with all proceeds going towards the enhancement and rehabilitation of rivers within the Sheelin catchment.

Welcoming anglers to the 14th event, chairman Kenneth O’Keeffe said: “I would like to acknowledge the local fishery staff for their efforts in keeping Sheelin a wild trout fishery. We have agreed a programme which will keep us going for the next number of years and we are currently aiming to carry out work on streams before spawning begins.”

The heavens opened for most of competition day but did little to deter the hardy anglers in their quest for top prize and a place in the history books. A minimum size limit of 16in applied, with two fish per angler allowed and just one handed in for weigh-in.

A comment overheard: “Forget about a measuring board today – if your fish is not over four pounds, you haven’t a chance of winning.”

At close of play back at Kilnahard Pier, 52 anglers proudly formed a queue with their fish in great expectation. And so it was. The cut-off point to qualify for the 15 excellent prizes stopped at four pounds. An amazing catch, and all to the fly.

This is my second time to win a boat. Back in 2014, I won the ITFFA youths fundraising competition on Lough Owel

Dylan Ennis from Moate, Co Westmeath had good reason to pay little attention to size limits. His fish weighed in at 7lb 5oz, a magnificent specimen by any standards. On a drift from Church Island to Chambers Bay he met the fish on a Minkie and, following a 40-minute battle, his friend Keith Byrne from Athlone safely landed the prize catch.

The worthy winner received a 19ft Sheelin boat, the Paddy Sheridan Memorial Cup and tackle to the value of €350.

“This is my second time to win a boat. Back in 2014, I won the ITFFA youths fundraising competition on Lough Owel,” he said.

On Sunday, the Cavan/Monaghan Garda Division held its open competition with 93 anglers in attendance and, again, Sheelin produced some quality trout. With similar rules applying and the bar still set at 16in, 13 fish made the weigh-in.

Pearly Green Dabblers were the order of the day for Tony Grehan and Danny O’Keeffe from Co Wicklow Anglers’ Association, who took pole positions with a trout each of 4.09lb and 3.12lb respectively, while fishing together in the vicinity of Church Island.

Fellow club member James Fagan was close behind in third position with a fish of 3.11lb. In the Garda category, Philip Kavanagh from Ashbourne topped the pole, his fish weighing in at 3.14lb.

Back in the Royal Bar in Ballyjamesduff, anglers tucked into a splendid meal and presentation of prizes. Tributes were paid to two stalwarts who passed away during the year: Michael McCabe of Sheelin fame and Sean Maloney, a staunch supporter of the competition.

Entries are now being accepted for the Waterford City and County Trout Anglers’ Association catch and release competition at Knockaderry Reservoir in Kilmeaden on Monday October 28th.