Rhys McClenaghan ‘cried like a baby’ after sealing Olympic spot

Irish gymnast recalls the moment he fulfilled his childhood dream 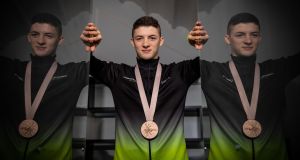 Eight days after the biggest achievement of his career and Rhys McClenaghan’s face is still flush with emotion.

Even recounting the tearful call home with the news causes the gymnast to bite his lip, shivering at the thought of becoming an Olympian.

“I cried like a baby,” he recalls. “People were saying I’d pretty much qualified until the very last person and when the last person qualifying came up on my laptop, when I was lying in bed, I just called my mum straight away and the emotions just fell out of me.

“I was just thinking back to when I was eight years old saying: ‘Mum, I want to go to the Olympics!’

“We couldn’t get a sentence out of each other, gurning to each other over the phone. It’s a childhood dream coming true going to the Olympics – even weird saying that now.”

McClenaghan’s work at the World Championships in Stuttgart was far from complete. He would go on to claim a historic bronze medal in the pommel horse final at the weekend, after already realising a life ambition. It bookended a long journey back from injury, but it also began another journey, which he hopes will end on a podium in Japan.

At last year’s World Championships the gymnast suffered a labrum tear in his shoulder which required him to return to his childhood days, learning the basics of his craft.

“It’s special – it’s very special to me after coming back from surgery, because of how difficult it was. But having the support of . . . Gymnastics Ireland was so huge.

“It’s a very low point in an athlete’s career when they have to go through that recovery process. You’re taking a big step back.

“You’re constantly training your whole life and then you have this big period, all of a sudden, when you’re not training. It’s mentally challenging as well as physically, so this is why I’m sitting here very proud and honoured to have this world medal around my neck.”

And it’s this evident psychological strength that sets the 20-year-old apart, according to Luke Carson, his coach.

“You can train, you can do the numbers, and I’ve seen it,” says the coach. “In my time in England, there were lots of people who were unbelievable gymnasts – world class – but when they put their hand up, they were a different athlete altogether.

“He was a nobody at the [2015 Masters final] and he was in a final with two Olympic medallists. When he put his hand up he was on the podium and he was right beside Max Whitlock and Louis Smith, two of the world’s best pommel workers at the time.

“He was up there on the podium with them. I think at that moment I knew that he could absolutely go all the way. I think I said it to Louis Smith’s coach at the time – I said that he’d be world or Olympic champion.”

No sooner had the Co Down man stepped off the plane back in Ireland – after a weekend celebrating and socialising with fellow gymnasts such as Krisztián Berki, the 2012 Olympic champion, and the world renowned Simone Biles – and he was preparing for another journey. Already McClenaghan and Carson are putting the final touches on his Olympic timetable. But first: a short rest for the gymnast.

“I’m going to have a couple of weeks off, a much-deserved break. It’s been very difficult throughout the programme in the build-up to the worlds. I’m just going to use this time to relax and just start over with the programme.

“Then when we start the programme, we can maybe focus on some new skills, adding in the difficulty, putting in combinations.

“We’re planning out a schedule for competitions throughout the year which will get me competing again, competing against the best in the world and learning from them.

“Also, I believe that there is a potential training camp in Tokyo. It’s an exciting year ahead.”

Bryson DeChambeau trainer insists muscle gain is not down to steroids 09:05
Golf Majors return with US PGA, Man United progress in Europe 07:39
Sporting Cathedrals: Le Stadium - European fortress of the mighty Toulouse 06:00
Joanne O’Riordan: Why doesn’t streaming bonanza extend to women’s sport? 06:00
GAA playing the long game as they await loosening of spectator restrictions 06:00
Here is your handy guide to sport on television this week