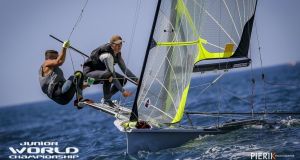 A strong overall performance in a range of conditions led to Howth’s Robert Dickson and Skerries Seán Waddilove lifting the World Under 23 title in the 49er skiff class at the weekend in Marseilles.

A total of 52 crews competed for the title at the venue that will host the 2024 Paris Olympic sailing regatta.

The North Dublin pairing have recovered form and more since injury beset their campaign earlier this year before competing at the World Sailing Championships in Aarhus last month as Development Squad members.

Meanwhile, on Dublin Bay on Saturday the SB20 European Championships ended with Michael O’Connor’s Sin Bin from the Royal St George YC placing top Irish entry in the ten-race series that was won by Russia’s Artem Basalkin by a healthy 19-point winning margin.

A fleet of 47 boats from ten countries contested the event that was hosted by the Royal Irish YC.

1 David Clifford sends everyone back to their corners unbeaten
2 Mike Catt hopes to have Irish backs purring in Six Nations
3 James Durcan steals a draw for Mayo in Ballybofey
4 Six Nations: Ireland are contenders but England still the team to beat
5 Wexford hurlers win entertaining contest against Laois
Real news has value SUBSCRIBE