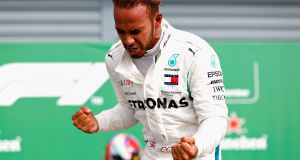 Lewis Hamilton celebrates his victory in the Italian grand prix at Monza. Photograph: Will Taylor-Medhurst/Getty

Lewis Hamilton won the Italian Grand Prix for Mercedes, after a dramatic clash with his title rival, Ferrari’s Sebastian Vettel. The pair touched on the opening lap and Vettel went off. He came back but could manage only fourth place.

The result left a deflated crowd at Ferrari’s home grand prix but was a huge result for Hamilton against the odds that enabled him to extend his lead in the championship to 30 points. Kimi Räikkönen was in second with Valtteri Bottas in third and Max Verstappen in fifth.

Hamilton ultimately won through several decisive overtaking manoeuvres on a circuit where Ferrari had held the advantage all weekend. Equally, Mercedes managed their strategy to perfection, calling their stops well to ensure Hamilton was in a position to take the lead from Raikkonen in the final third after an error by Vettel, once again, proved to be a blow to his title hopes.

It is Hamilton’s fifth win at the Italian Grand Prix, equalling Michael Schumacher’s record. His sixth win of the season, one more than Vettel, continues his remarkable recent run at Monza. He has won four of the five races held here since the turbo-hybrid era began, a period in which Mercedes remain unbeaten. On the previous three occasions Hamilton has won in Italy he has gone on to take the championship.

Hamilton had done his best in qualifying to take third on the grid, acknowledging that Ferrari had enjoyed the quicker car. He and Mercedes were able to step up and execute perfectly to deny the Scuderia however.

Mercedes have been dominant here but they clearly no longer have hegemony at the power circuits and may count this as a win against the head that could prove vital, especially with the next round at Singapore, a circuit where they have traditionally struggled and where Ferrari and Red Bull have been strong.

This 68th career win once again swings the title fight in Hamilton’s favour, restoring the cushion he has to Vettel with seven race remaining.

Räikkönen had got away cleanly from pole and the front three held their position through the first chicane but drama was to follow almost immediately. Hamilton went round the outside of Vettel through the Roggia chicane but the German slightly understeered and the pair touched. Vettel spun into the gravel and took some damage in the process and dropped to 18th. The incident was investigated by the stewards but they deemed it a racing incident.

The safety car had been called due to Brendon Hartley taking damage off the grid and Vettel took the chance to immediately pit for a new front wing and the soft tyres.

When racing resumed on lap four Hamilton went one better, passing Räikkönen on the start-finish straight but gloriously Räikkönen hit back immediately coming back round the outside of Roggia with great piece of late braking to retake the lead.

Vettel charged to make the places back and was up to 15th by lap eight, made up two more places on lap nine and was into the top 10 by lap 17 but told his team he still had damage, noting that the balance of his car was slightly off.

Out front, Hamilton settled into a rhythm just over a second back from Räikkönen, both drivers managing their tyres, with the pair putting in similar times. The Finn was the first to stop, coming in for soft rubber on lap 21.

Hamilton stayed out, pushed and promptly set a new fastest lap but Räikkönen also nailed his opening laps on the new tyres, overworking them – which was to prove fateful later – and when Hamilton pitted on lap 28 he emerged well behind the Finn.

Vettel pitted again on lap 30 to take the quicker supersoft tyres but Mercedes had kept Bottas out since he was now in front of Räikkönen in a bid to delay the Ferrari driver. Bottas did superbly and it worked, enabling Hamilton to catch them both.

Bottas finally came in on lap 37 leaving Hamilton and Räikkönen in a straight fight at the front, with just over a second between them. Hamilton came into DRS range and began climbing all over the back of Räikkönen. On lap 45, with Räikkönen’s tyres suffering, he could defend no more as Hamilton went round the outside through the Rettifilo chicane. His second decisive move was enough to secure what had looked to be a highly unlikely win at the start of the afternoon.

The Haas of Romain Grosjean was in sixth, in front of the the two Force India’s of Esteban Ocon and Sergio Pérez. Carlos Sainz in the Renault was in ninth with the Williams of Lance Stroll scoring his team’s second top ten finish of the season in 10th.

Daniel Ricciardo was forced to retire with what appeared to be another engine failure on lap 25.