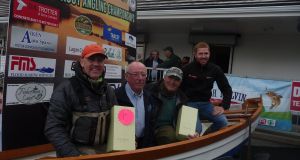 THE picturesque village of Garrison, near Enniskillen in Co Fermanagh came alive last week for the 39th Lough Melvin Open Trout Angling Championships. Records tumbled as entries soared to 308 this year with competitors from England, Wales, Scotland, Australia and from across Ireland, all eager to test their wits on this magnificent eight-mile lough.

Weather conditions over the four days were quite good although on finals day, the predicted storm forecast luckily held off until the final hour.

The quarry was, of course, the wily sonaghan trout. Unique to Melvin, these dark bodied, relatively small fish, are to be found in the deeps feeding on daphnia and require a minimum takeable size of 11 inches!

The saying: ‘patience is a virtue’ certainly applies as the species hunt in ‘packs’ or (pods). The angler lucky enough to meet a pod will usually take a fish or two. The search then begins, and for some it may well be the only action of the day. When it comes to suitable flies, virtually any recognised pattern will work on their day.

That said, it was a different story for Loughrea angler Robert Reilly and Hubert Smith from Dundalk. Having romped home in first place on qualifying day with four fish and then trebling that score with six each on finals day they were, indeed, worthy winners of the 2018 Melvin Open Championships.

“This is the first time for both us to feature in the top prizes. We’re absolutely delighted. All our fish were caught off Maguires Island on Claret Dabblers and Muddler Green Peters,” said Reilly.

Throughout the year, the Garrison club were busy improving facilities at their splendid clubhouse.

“When funds permit, we endeavour to work on the most pressing jobs. This year we put tarmacadam on part of the car park and a concrete base surrounding the clubhouse. CCTV and WiFi were also installed,” Malcolm Finney said.

He went on: “We are extremely grateful to Northern Ireland Fisheries for providing 400 tons of gravel for spawning purposes in our tributary rivers. We again electro-stripped 18,000 salmon eggs from our local Roogagh River and placed them back again as fingerlings into the river,” he said.

Promoting angling among the youngsters also continued at a pace. Between 30 and 40 juniors were treated to a day on Birchwood Fishery, Drumquin for rainbow fishing followed by a barbecue. In addition, fly tying classes, casting instruction and hatchery visits all augur well for the future of angling!

Club member, Billy Graham certainly does his bit to keep the flag flying for the club with five of his family competing across three generations. Surely that’s a record in itself?

Addressing the crowd at the prizegiving, club chairman, Sean Rasdale, said: I would like to thank all our sponsors, my hardworking committee and the ladies for providing teas and sandwiches.”

A minute’s silence was observed for the two local young people who tragically lost their lives in a nearby road accident and for Neil Carpenter whose wife, Ann, passed away recently.

Sincere thanks was extended to the local Spar shop and Gilroys for the ‘goodie bags’ issued to each angler. (My thanks also to the McGorthy’s of Melvin Country House for their splendid accommodation (028-6865 8766).)

A team of youth anglers recently travelled to Modena, Italy to represent Ireland at the FIPSed World Youth Angling Championships. With just a week’s training in blistering heat, the youngsters set about fishing three-hour matches over two days against teams from 11 nations on the Cavo Lama Canal.

The main species were carp with some bleak, rudd and catfish. After a promising start on the first day and an eighth-place finish, fishing was tough on day two and Team Ireland finished in 10th position overall.

The day was enjoyed by all with everyone putting fish in the net, and some fine catches of quality rudd were produced.

FYI. Venue for the All-Ireland Junior Feeder Fishing Championships is yet to be confirmed, but is scheduled for Saturday, 13th October. Contact Brenton Sweeney on 087-251 0260 for details.

If sight fishing in clear, Alpine water with lightweight gear for free-rising trout and trophy grayling is your thing, it’s time to put Germany on your ‘to-fish’ list.

Dragon Valley in Upper Bavaria is a new and exclusive destination, offering private fishing on the River Leitzach. It’s a perfect short-haul getaway for trout fishers.