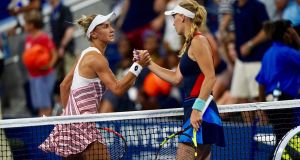 The women’s tournament is without its top two seeds heading into the third round after Australian Open champion Caroline Wozniacki joined Simona Halep in making a shock early exit.

Like Halep’s first-round loss to Kaia Kanepi, Wozniacki could have no complaints after being well beaten by Ukraine’s Lesia Tsurenko 6-4 6-2.

The Dane said: “I started off pretty well, then I think I played well in parts of the first set, just trying to stay aggressive. But she was playing smarter than me. She played the game that I was supposed to be playing.”

After breaking her grand slam duck in Melbourne after so many years of trying, it has not been a great season for Wozniacki, barring a title in Eastbourne in June.

She has failed to go beyond the fourth round at any of the three slams since, with this defeat following a second-round loss against Ekaterina Makarova at Wimbledon.

Wozniacki said: “This part of the season is usually a part of the season I really look forward to, one I really play well. I definitely would have wished to have played more and gone further. All I can do now is regroup, think what I can do, and also just make sure my body is 100 per cent.

“I’m always going to say it’s a great season because I won my first major. If I hadn’t won in Australia, we would be talking differently. But I did. I’m very proud of that. It’s something that nobody can ever take away from me.”

Over on Arthur Ashe, Maria Sharapova avoided more late-night drama, recovering from a break down in the second set to defeat Sorana Cirstea 6-2 7-5 and set up an exciting clash with Jelena Ostapenko.

No-one has risen more swiftly up the ranks in women’s tennis this season than Aryna Sabalenka, and the Belarusian is looking to do some damage in New York.

Sabalenka began the season ranked 78 but now sits just inside the top 20 and, at 20, is the youngest of that elite group.

After beating four top-10 players in a sequence of results building up to this tournament that culminated with her first WTA Tour title in New Haven, Sabalenka defeated Vera Zvonareva 6-3 7-6 (9-7) to reach the third round at a grand slam for the first time.

She said: “Of course this is unbelievable for me and I’m really in shock right now because it was such a great summer for me. I didn’t expect it to be that good and I’m so happy with this level I show on the court.”

The third round is usually where grand slams come alive and there will certainly be plenty of eyes on Sabalenka’s next clash with fifth seed Petra Kvitova, who is showing strong form in New York and defeated China’s Wang Yafan 7-5 6-3.

The German looked to be cruising at a set and a break up and served for the match, only for Larsson to hit back and take it to a decider, which fourth seed Kerber edged for a 6-2 5-7 6-4 triumph.

Sixth seed Caroline Garcia was also pushed hard in a 6-2 1-6 6-4 victory over Monica Puig while there were also wins for Naomi Osaka, Madison Keys and Kiki Bertens.

Dominika Cibulkova defeated Hsieh Su-wei but was astonished to be penalised two points for arriving back late following the heat break at the end of the second set.

The Slovakian said: “It’s a 10-minute break, but they don’t consider that we walk from Court 17. It took me, I think, more than three minutes walking through the people, because there were so many fans.

“And then the umpire, she just told me, ‘OK, it’s going to be 0-30’, and I couldn’t believe it. I think it’s not right to get two-point penalties because of this.”